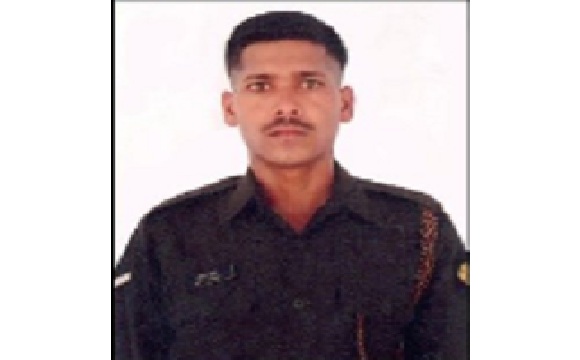 Hav Anil Kumar Tomar hailed from Sisauli village in Meerut district of Uttar Pradesh. He joined the Army after completing his education in the year 2001 at the age of 21 years. He was recruited into 23 Rajput battalio of the well-known Rajput Regiment, an infantry regiment widely respected for its intrepid soldiers and numerous battle exploits.

During Dec 2020, Hav Anil Kumar‘s unit 44 RR was deployed in the Shopian district of J & K along the LOC. As a number of militants were active in the unit’s AOR(Area of Responsibility), the unit troops had to maintain a very high state of preparedness at all times and had to undertake operations at a short notice. Based on the information from the intelligence sources, about the presence of some hardcore militants in the Kanigam area of Shopian district, the security forces decided to launch a joint combing operation on 25 Dec 2020, comprising the elements of Army, CRPF, and J&K Police. Hav Anil Kumar was part of the team from 44 RR that was assigned the task of search and cordon operation.

As the operation was underway the terrorists hiding in the area attacked the troops to break the cordon and flee. A fierce gun battle ensued thereafter lasting for several hours. During the drawn-out battle, Hav Anil Kumar and his comrades managed to eliminate two terrorists. During the heavy exchange of fire, Hav Anil Kumar got severely injured but despite his injury, he showed the highest level of courage and valour by returning effective fire, in which one terrorist was killed. Hav Anil Kumar was immediately shifted to 92 Base Hospital at Srinagar for medical treatment. But Hav Anil Kumar, after fighting for three days lost the battle for life on 28 Dec 2020 and was martyred. Hav Anil Kumar was a valiant and committed soldier, who laid down his life in the line of his duty. Hav Anil Kumar Tomar was given the gallantry award, “Shaurya Chakra” for his exceptional courage, devotion to duty and supreme sacrifice.

On 25 December 2020, based on the input of the presence of two-three unidentified terrorists, a cordon and search operation was launched in a village in Kashmir. Havildar Anil Kumar Tomar was leading a Combat Action Team for the operation. The Mission leader directed him to readjust the cordon. While moving for the task, he came under heavy fire from the terrorists and sustained bullet injury in the thigh. Displaying utmost courage in the face of the enemy, he responded with accurate fire and neutralized one terrorist. Then, he pursued the second terrorist, injured him and cornered him inside a house. When Mission Leader decided to address the house using an excavator, Havildar Anil Kumar Tomar, despite being injured, volunteered to guide the excavator. The injured second terrorist emerged from the house, firing indiscriminately when the house was being addressed. He engaged the second terrorist, neutralized him on the spot, and fell unconscious. He was evacuated but succumbed to his injuries and laid down his life in the line of duty.