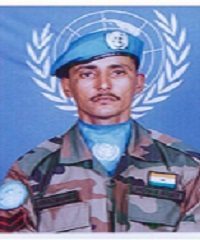 Havaldar Amal Deka was a soldier in the Indian Army and belonged to the 315 Field Artillery Regiment. He was serving in the United Nations Disengagement Observer Force (UNIDOF) and lost his life during a peacekeeping operation in June 2015.

Ever since the 1950s, there has been a very unstable situation between the states of Israel and Syria, characterized by frequent breakouts of conflict and war. Following the tragic Six-Day War of 1967, another war broke out years later in 1973. On October 6, 1973, in an effort to win back territory lost to Israel during the third Arab-Israeli war, Egyptian and Syrian forces launched a coordinated attack against Israel on the day of Yom Kippur, the holiest day in the Jewish calendar. Egyptian troops swept deep into the Sinai Peninsula, while Syria attempted to throw Israeli troops out of the Golan Heights. Israel counterattacked and recaptured the Golan Heights. A cease-fire went into effect on 25th October 1973 and on 31st May 1974, the Israeli and Syrian forces signed the ‘Agreement on Disengagement’. On the same day, as per the UNSC Resolution 350, the UNIDOF was established.

Ever since its formation, the UNIDOF has remained in the area, maintaining the ceasefire between Israel and Syria and have been supervising the implementation of the disengagement agreement.

Havaldar Amal Deka worked for this inspiring cause. In June 2015, Havaldar Amal Deka was killed in the region while serving under UNIDOF. For his ultimate sacrifice, he was chosen to be posthumously awarded the revered Dag Hammarskjold Medal by the UN on the International Day of United Nations Peacekeepers (29th May).

On 29th May 2016, India’s Permanent Representative to the UN Ambassador Syed Akbaruddin collected the medal on behalf of the fallen peacekeeper at a poignant ceremony in the UN General Assembly hall.