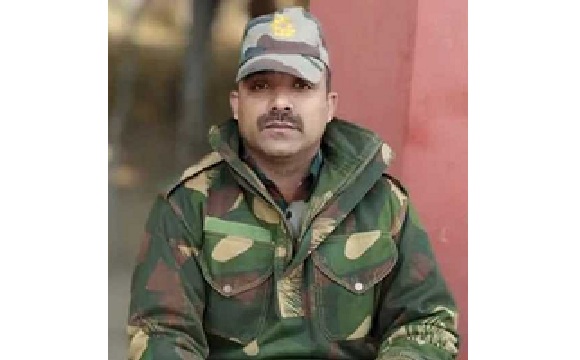 Havaldar Altaf Ahmed hailed from Virajpet in Kodagu district of Karnataka. Son of Late Shri Ummar and Smt Ashiya, Hav Altaf Ahmed was born and brought up in Virajpet. He completed his education up to Class 10 at St Anne’s School in Virajpet and then went on to finish his PU education at the Virajpet Government Junior College. After completing his PU education, he joined the Army in 2003 at the age of 18 years. He was recruited into the Army Ordnance Corps (AOC), the arm that provides logistic support to the Indian Army in peace as well as war. The inventory of AOC covers every conceivable requirement of the soldier from clothing to weapons, from a needle to a tank and also all munitions except fuel, fodder, and medicines.

After serving for few years, he got married to Ms Zuberi a native of Yadapala in Virajpet and the couple had a daughter Asma Jasmine and son, Mohammed Afrid. He developed into a dedicated and professionally competent soldier.  By the year 2022, Hav Altaf Ahmed had put in around 19 years of service and had served in various challenging operational areas.

During 2022, Hav Altaf Ahmed’s unit was deployed in Jammu & Kashmir along the LOC. The AOR(Area of Responsibility) of the unit spanned over remote rugged mountainous terrain with extreme weather conditions, especially in the winter season. The troops were deployed on various forward posts and often undertook patrol to monitor the area in between the manned posts. Also, heavy snowfall often blocked the roads and hampered the movement of troops which necessitated frequent clearance operations. On 23 Feb 2022, Hav Altaf Ahmed was traversing through a planned route on an assigned task, when a horrific avalanche struck him.

The magnitude and suddenness of the avalanche did not give any time to him to take any evasive action. As a result Hav Altaf Ahmed got trapped under tons of snow. An immediate rescue operation was launched by the Army but the rescue team could not save his life. After prolonged efforts the team eventually managed to extricate Hav Altaf Ahmed's body. Hav Altaf Ahmed lost his life owing to prolonged exposure to extreme cold conditions. Hav Altaf Ahmed was a valiant and committed soldier who laid down his life in the line of his duty.