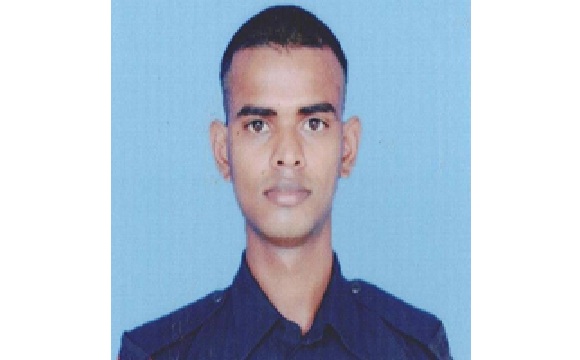 Gunner Souvik Hazra hailed from Khamarberia village at Bankura Sadar tehsil in the Bankura district of West Bengal and was born in the year 2000. He wanted to serve in the Army since his childhood and eventually, he joined the Army after completing his school education in the year 2019 at the age of 19 years. He was recruited into the 281 Field Regiment of the Regiment of Artillery, the important combat support arm of the Indian Army.  After serving with his parent unit for some time, Gnr Souvik Hazra was later deputed to serve with the 56 RR battalion, deployed in J&K for counter-insurgency operations. Before joining the 56 RR battalion, he served in operational areas in Punjab and Assam.

During Nov 2022, Gunner Souvik Hazra‘s unit 56 RR was deployed in the Kupwara district of J&K close to the Line of Control(LOC). The AOR (Area Of Responsibility) of the Battalion ran along the LOC, which was also prone to infiltration from across the border. Besides undertaking planned counter-insurgency and counter-infiltration operations, the unit launched regular armed patrols to monitor its AOR. Gunner Souvik Hazra was part of one such patrol on the night of 17/18th Nov 2022 in Machil Sector. The designated route of the patrol passed through the rugged area and was also prone to avalanches.  As the patrol was underway, Gunner Souvik Hazra, complained of breathing difficulty. After the initial assessment, it was planned to evacuate him to the nearest post. On approaching the nearest post, the tail of the patrol party comprising L/Nk Mukesh Kumar and Naik Gaikwad Manoj Laxman Rao came under a massive snow slide. A search and rescue operation was launched immediately with specialized equipment and the troops from the nearest post also moved to undertake the operation.