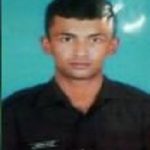 Gunner Shashikant Pandey hailed from Dhanbad district of Jharkhand. Son of Shri Rajeshwar Pandey and Smt Lalita Devi,  Gnr Shashikant had three other siblings: brother Srikant and sisters Rinku & Sindhu. He did his initial schooling in Gyan Bharti School at Jorapokhar and completed his intermediate science from RSP College, Jharia. After completing his intermediate he joined the Indian Army at the age of 20 years on 17th Dec 2012. He was recruited into 107 AD Regiment of the Corps of Army Air Defence.

Gnr Shashikant took great pride in being a soldier and would always encourage the youth of his town to join the armed forces. After serving with his parent unit for few years, Gnr Shashikant was deputed to serve with  51 RR Bn deployed in the Kashmir valley for counter-insurgency operations.

During 2016, Gnr Shashikant Pandey was serving with 51 RR battalion deployed in Pulwama district of J&K. The AOR (Area of Responsibility) of 51 RR was a hotbed of militant activity and the unit troops had to maintain a high state of readiness to deal with any eventuality. On 17th Dec 2016 Gnr Shashikant Pandey was made part of a team tasked for an operation. While Gnr Shashikant and other soldiers were heading for the operational location, their convoy was attacked by the group of heavily armed militants. The convoy came under attack while passing through the Pampore area along the Srinagar-Jammu National Highway.

It was a preplanned attack in an unexpected area and took the soldiers by surprise. However, the troops swung into action and a heavy exchange of fire followed thereafter. However during the exchange of fire, Gnr Shashikant Pandey and two other soldiers,  Nk  Ratheesh C & Gnr Farate Sourabh Nandkumar got seriously injured. They later succumbed to their injuries and they were martyred. Gnr Shashikant Pandey was a valiant and dedicated soldier who laid down his life at the age of 24 years in the line of his duty. Ironically Gnr Shashikant Pandey was martyred on the same date (17th Dec), he had joined the army four years back.