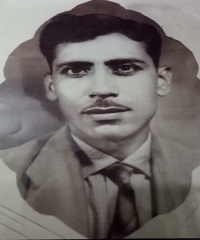 Late Gunner Shanti Lal was a brave and courageous man. His family members remember him and feel proud to be a part of  his family. He was part of 66 Medium Regiment popularly known as “DOUBLE SIX”

66 Medium Regiment’ was raised on 01 Feb 1963 at Jalandhar Cantt. Lt Col Bikram Chand, VSM was the first CO of the regiment. Right from infancy till date, the regiment has had the proud privilege of participating in all major operations undertaken by Indian Army. Barely two years after the raising, the ‘THE DOUBLE SIX’ was Launched Into 1965 war and was deployed in ‘BURKI’ In Lahore,Pakistan.

Late GUNNER SHANTI LAL was a brave and courageous man. His family members still remember him and feel proud to be a part of his family. I, Sandeep, grandson son of SHANTI LAL JI want to let everyone know about him So that whoever has forgotten the sacrifices of our great freedom fighters should know about them.