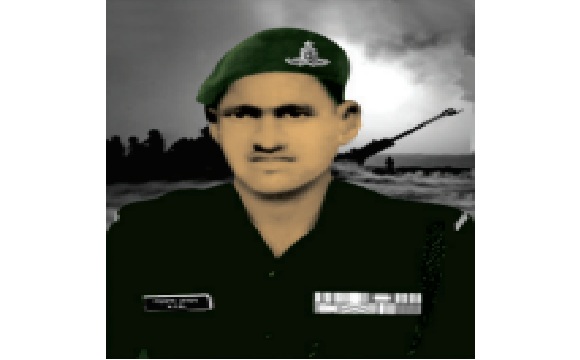 Gunner Laxman Jadhav hailed from Matwan village in Dapoli tehsil of Ratnagiri district in Maharashtra. Son of Shri Kashi Ram, Gnr Laxman Jadhav was born on 21st Nov 1944. After completing his initial education, he joined the Army on 21 Nov 1962 at the age of 18 Years. He was recruited into 216 Med Regt of the Regiment of Artillery, an important combat arm of the Indian Army. After serving for sometime, he got married to Ms Kamalawati. By the year 1971, Gnr Laxman Jadhav had put in around 09 years of service after having worked in various operational areas.

During Indo- Pak 1971 war Gunner Laxman K Jadhav’s unit, 216 Med Regt was deployed on the western border. The unit was deployed in the Chhamb sector under the operational control of the 10 Infantry Division. The Battle of Chhamb of 1971 war was an epic feat of arms. It stood out as one of the most important battles of all three Indo-Pak wars in terms of operational strategy, small unit actions, and handling of armour. The Chhamb sector was bounded by the ceasefire line/international border in the west and south while a range of hills constituted its northern portion running roughly in an east-west line. Some ridges, however, jutted downwards from this range of hills and ran along a north-south alignment, the most prominent of these being the Phagla Sakrana Bridge.  216 Med Regt was deployed at Chapriyal area, East of Munawar Tawi under the operational control of 10 Div Artillery Brigade, commanded by Brig Hari Srinivasan.

As part of ongoing operations, Gnr Jadhav and his comrades were deployed at Chapriyal area under the command of Lt Col ML Sethi to support the infantry operations. Gnr Jadhav was part of the team that was occupying a key position for the defense of Chhamb, when the enemy launched an attack on the night of 04 December 1971.  The attack continued throughout that night and thereafter for sixteen hours but Gnr Jadhav held on gallantly along with his comrades and thwarted the enemy’s advance.

However as the position was of strategic importance to the enemy, it launched another attack on the 5th morning,  preceded by heavy artillery fire. Gnr Jadhav once again swung into action to retaliate forcefully. However, while doing so, Gnr Jadhav got hit by a shell and was martyred.  A total of two officers, two junior commissioned officers (JCOs), and 64 other ranks of the regiment, including the CO, Lt Col M L Sethi, was martyred during the entire operation. Gnr Jadhav displayed admirable grit, devotion to duty during the operation and laid down his life in the service of the nation.
Gunner Laxman K Jadhav is survived by his wife Smt Kamalawati.