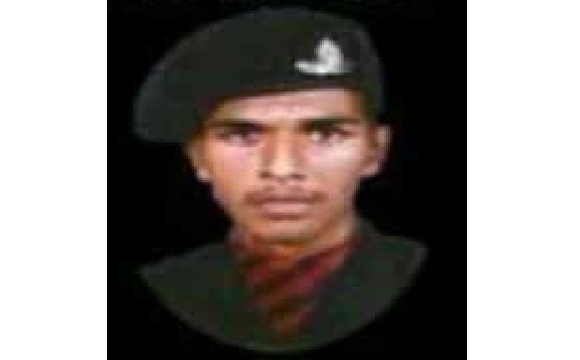 Gnr Jaya Krishna KV joined the Army after completing his school education at a young age. He was recruited into 96 Field Regiment of the Regiment of Artillery, an important combat support arm of Indian Army well known for its booming field guns and heavy weaponry.

During Mar 2003, Gnr Jaya Krishna KV’s unit 96 Fd Regt was deployed in Kargil district of Ladakh. The unit troops were manning the forward posts in Drass Sector of Kargil district along the LOC. The forward posts of the unit were located in high altitude areas with extreme weather conditions. The location of many posts was also prone to snow blizzards and unpredictable avalanches. During the last week of Feb 2003, there was heavy snowfall in Ladakh including Drass Sector with the area covered under few feet of snow. The heavy snow fall was accompanied by multiple avalanches in the Kargil sector. A number of road links were cut off due to heavy snowfall as avalanches hit Kaksar, Kharboo, Mushkoh and Handurman posts. Heavy snowfall in this region throughout was followed by a mild earthquake which smashed many bunkers along the Line of Control (LoC) burying several soldiers housed in them. Gnr Jaya Krishna KV and his comrades too were hit by one such horrific avalanche on 02 Mar 2003.

The suddenness and severity of the avalanche took the soldiers off guard and prevented them from taking any preventive action. The soldiers got trapped and buried under tons of snow. The army launched a team with specialized equipment to rescue the soldiers in the quickest possible time. The rescue team managed to extricate some soldiers, however, Gnr Jaya Krishna KV and 14 other soldiers could not be saved owing to their prolonged exposure to extreme cold. Besides Gnr Jaya Krishna KV, the other soldiers included  Hav A Ingersal, Hav Raghunath G, Nk Ranjith KT, L Nk Daniel Joseph, Nk Chukka Some Reddy, Gnr Jeya Krishnan T, Gnr R Jaya Kumar, Gnr Pradeep Kumar P, Gnr Irappa Savadatti, Gnr KS Shiva Kumar, Gnr G Cheepuru, Gunner Karaveerappa V Kamatar and Gnr Chalapathi Rao.  Gnr Jaya Krishna KVwas a courageous and dedicated soldier who laid down his life in the line of his duty.