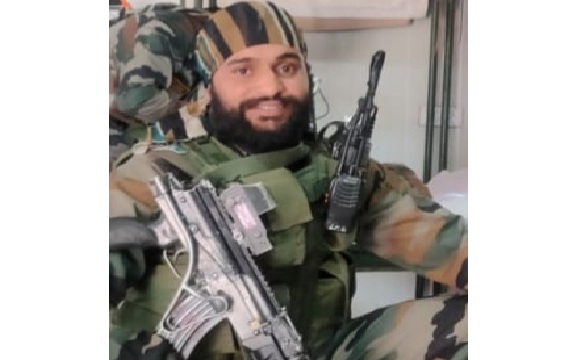 Gunner Jasbir Singh hailed from Vain Poin village in Tarn Taran district of Punjab and was born on 25 Feb 1995. Son of a farmer Shri Gurbhej Singh and Smt Sukhwinder Kaur, he had a younger brother Ranjit Singh and elder sister Rajwinder Kaur as his siblings. He was inclined to join the Army since his younger days and kept following his dream. He eventually joined the Army after completing his school education from Government Secondary School Fatehabad.

He was recruited in December 2014 at the age of 19 years, into 39 Field Regiment of the Regiment of Artillery, the important combat support arm of Indian Army, well known for its booming field guns and heavy weaponry. After serving for a few years with his parent unit, he was deputed to serve with 19 RR battalion deployed in J & K for counterinsurgency operations.

During 2021, Gnr Jasbir Singh’s unit 19 RR battalion was deployed in the Anantnag district of Jammu and Kashmir and was engaged in operations against the militants on a regular basis. On the night of 30/31 Dec 2021, there was an attempt by the militants from across the border to sneak into the valley in the Nowgam sector about 100 kms from Srinagar. The troops of 19 RR battalion were already on high alert as the intelligence sources had informed the security forces about such possible attempts along the LOC. On getting specific intelligence, the troops of 19 RR battalion launched a search and cordon operation in the suspected area in its AOR(Area of Responsibility). Gnr Jasbir Singh was part of the team that was entrusted with the task of taking on the infiltrators.

As the search of target house was in progress, the terrorists opened indiscriminate fire and lobbed two grenades in a bid to break cordon and flee. Sensing danger to own troops Gnr Jasbir Singh immediately sprung into action and with utter disregard to his personal safety he repositioned himself and retaliated with accurate fire. This action of Gnr Jasbir Singh blocked the escape route of terrorists but they continued to fire. He then showing indomitable courage moved ahead, closed in with the firing terrorists and eliminated one terrorist. In the continuing gunfight, Gnr Jasbir Singh got severely injured with multiple gunshots. He was later shifted to the hospital, where he succumbed to his injuries and was martyred on 01 Jan 2022.  Gnr Jasbir Singh was a valiant and dedicated soldier, who at the young age of 26 years, laid down his life in the service of the nation. Gnr Jasbir Singh was given the gallantry award, “Shaurya Chakra” posthumously on 15 Aug 2022, for his commendable bravery, devotion to duty, camaraderie and supreme sacrifice.

On 29 December 2021, Gunner Jasbir Singh was part of inner cordon during an operation in which three terrorists were eliminated.

On specific input, a cordon and search operation was launched in a village in Anantnag District (Jammu and Kashmir). As the deliberate search of target house was in progress, the terrorists opened indiscriminate fire and lobbed two grenades in a bid to break cordon and flee. Sensing danger to own troops Late Gunner Jasbir Singh immediately sprung into action and with sheer disregard to his personal safety he repositioned himself and retaliated with accurate fire which blocked the escape route of terrorists but terrorists continued to fire. He then showing indomitable courage moved ahead, closed in with the firing terrorists and eliminated terrorist with M4 weapons at close range later identified as a CAT A++, who was involved in Pulwama attack. In the ensuing gunfight, Gunner Jasbir Singh sustained multiple gunshot wounds and made the supreme sacrifice in the line of duty.

For displaying exceptional gallantry beyond the call of duty and nerve of steel under hostile fire in the face of enemy, Gunner Jasbir Singh is recommended for the award of
“SHAURYA CHAKRA (POSTHUMOUS)”.