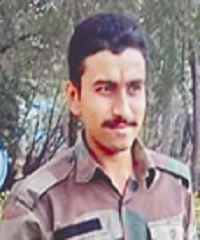 Gunner Harsit Bhadoriya was born in the year 1993 and his family originally hailed from Quarri village in Agra district of Uttar Pradesh. However his family moved to Rajasthan in Banswara district where his father worked in a cloth mill and mother in a school. Son of Shri Rajkumar Bhadoriya and Smt Jyoti Singh, Gunner Harsit had one sister Jigyasa as his sibling.  After completing his initial education, he joined the Army In 2014 at the age 21 years.

He was recruited into 1851 Light Regiment of the Regiment of Artillery, an important combat arm of the Indian Army well known for its booming field guns and howitzers. After completing his training he got posted to Bhatinda in Punjab as his first assignment. Later he got posted to the trouble torn J&K area where his unit was deployed at the LOC.