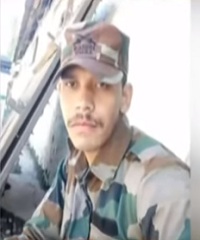 Gunner Bhupender Singh hailed from village Bass (Ranila) of Charkidadri Tehsil in Bhiwani District of Haryana and was born on 03 Mar 1997. Son of a farmer Shri Malkhan Singh, Gnr Bhupender had a younger brother Deepak as a sibling. He was inclined to join the Army since his younger days and kept following his dream. He eventually joined the Army after completing his school education at the age of 18 years. He was recruited into 327 Med Regt of the Regiment of Artillery, an important combat support arm of the Indian Army known for its awe-inspiring field guns and howitzers.

After serving for a few years, he got married to Ms. Rekha hailing from Jhajjar district and the couple had a son in the year 2019. By the year 2020, he had put in around 5 years of service and gained experience in operating various guns of his Regiment. He was a motivated soldier and would often encourage his younger brother and friends of his village to join the Army.

On 05 Sep 2020, Pakistan Army troops initiated unprovoked firing on Indian posts from across the border in the Naugam Sector of Kupwara district. During that period, Gnr Bhupender Singh was manning one of the forward posts along the Line of Control in the Naugam sector. The Pakistani troops violated the ceasefire and resorted to heavy cross border firing using small arms as well as artillery guns along the LOC. Indian army responded in a befitting manner to the Pakistani aggression and consequently, a heavy exchange of fire ensued thereafter, which continued intermittently for several hours. However, during this heavy exchange of fire, Gnr Bhupender Singh got injured by shelling. He was shifted to 92 Base Hospital in Srinagar for medical treatment but he later succumbed to his injuries and was martyred. Gnr Bhupender Singh was a brave soldier who laid down his life at the age of 23 years in the line of his duty.