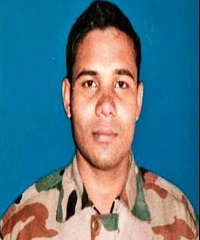 Gunner Astosh Kumar hailed from Jaunpur in Uttar Pradesh and was a son of  the Kargil war martyr Havaldar Lal Sahib. Inspired by his father, at the age of 19, Gunner Astosh had joined the Indian army. Patriotism and sense of sacrifice ran in the blood of Gunner Astosh Kumar as his father Hav Lal Sahib had laid down his life during the Kargil war in 1999 when he was barely a seven-year-old. He was recruited into 111 RKT Regt of the Regiment of Artillery, the combat arm of the Indian Army, well known for its booing field guns. After serving for a couple of years with his parent unit he was deputed to serve with 13 RR battalion, deployed in J&K for counter-insurgency operations.
Bandipora Operation: 14 Feb 2017
During Feb 2017, Gnr Astosh Kumar’s unit was deployed in the Bandipora district of J&K. On 13 Feb, the unit received information from the intelligence sources about the presence of some hardcore militants hiding in a locality falling in its AOR(Area of Responsibility). As a result, on the early morning of Feb 14, 2017, Gnr Astosh Kumar’s unit 13 Rashtriya Rifles, the Special Operation Group of J&K Police and the CRPF launched an operation in the Parray Mollah locality in Bandipora to nab militants hiding in a two-storeyed house. While the forces were conducting the search operation, the hiding militants fired upon them, and a fierce gun battle ensued thereafter.
During the heavy exchange of fire, fifteen security personnel including Gunner Astosh Kumar, Ptr Dharmendra Kumar and Rifleman Ravi Kumar got injured and they were airlifted to an army hospital in Srinagar. In this operation, several terrorists including one top LeT commander were neutralized. However, Gunner Astosh Kumar, Ptr Dharmendra Kumar, Rifleman, and Ravi Kumar later succumbed to their injuries and were martyred. Gunner Astosh Kumar was a brave and dedicated soldier who laid down his life at the age of 25 years in the service of the nation.