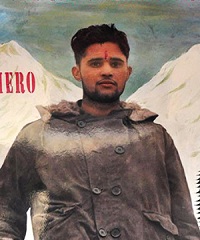 Grenadier Udayman Singh was a native of  Shamachak city of Jammu & Kashmir. He was born in the family of Omkar Singh and  Kanta Devi and had two elder sisters. Grenadier Udayman Singh always wanted to serve in the Army ever since he was a child for which he worked hard and achieved his goal at the age of Eighteen. He was inducted into the 18 Grenadiers Regiment of Indian Army.

On the night of 4th July 1999, during the Kargil war, the 18 Grenadiers team were given the responsibility to recapture the Tiger hill along with two other battalions. To evict the Pakistani troops from the hill, these battalions had launched an attack and reached the top of the hill, using ropes and other accessories. After  reaching the peak , they had to face intense gun firing from enemy . In this ensuing gun battle  Grenadier Udayman Singh  received a fatal gun shot and succumbed to his injuries. He was martyred along with his two other  comrades on 5th of July. However, their bodies could be recovered on 9th July 1999.

Grenadier Udayman Singh is survived by his parents and two sisters.