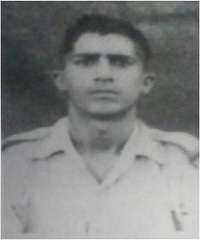 Grenadier Gorakh Ram was born on 16th November 1944, at Jodhpur in Rajasthan. Son of Shri Dipa Ram, Gnr Gorakh Ram joined the Army at the age of 18 years and was recruited into the Grenadiers Regiment on 16th Nov 1962. He served with 8 Grenadiers and by 1971 had gained in about 9 years of experience in serving in various operational areas with different terrain and operational conditions.

During 1971 Indo-Pak war, Gnr Gorakh Ram’s unit was deployed in the western sector. The war broke out on 03 Dec 1971, and by 10th Dec the battle on the western front had become very fierce with fast changing battle lines. As per the progress of the war, the area commander planned an attack on the enemy positions in Chakra area on the night of 10th Dec. The attack was to be launched by 8 Grenadiers and Gnr Gorakh Ram was part of the company tasked for the job.

As the attack was launched by Gnr Gorakh Ram’s company , its headquarters came under severe attack from the enemy forces.  An enemy Light Machine Gun from a nearby bunker was posing a serious threat and was responsible for attrition on our side. Having assessed the situation, Gnr Gorakh Ram, realized that the enemy LMG had to be silenced somehow to prevent further loss of lives.

Gnr Gorakh Ram decided to undertake this job and charged on to the bunker. While moving forward  Gnr Gorakh Ram got injured but did not back out and instead continued his charge. He attacked the bunker single handedly and silenced the LMG. In doing so  Gnr Gorakh Ram got severely injured and was martyred.  Gnr Gorakh Ram displayed exceptional bravery and indomitable spirit  during this attack and was given the gallantry award, “Vir Chakra”  posthumously.

Grenadier Gorakh Ram is survived by his wife  Aashi Devi and two sons Bhomaram and Navlaram.

Grenadier Gorakh Ram was a member of a company headquarters team of the Grenadiers during an attack on the enemy defences at chakra in western sector the night of 10th December 1971. The company headquarters came under effective fire from an enemy machine gun firing from a nearby bunker. Though seriously wounded,  Gorakh Ram charged the machine gun post single handed and silenced it before succumbing to his wounds.