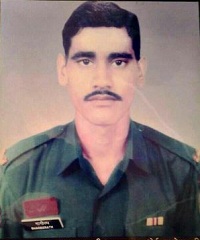 Grenadier Bhagirath Karwasara  was born on January 10th 1978, in Merta village of Nagaur district in Rajasthan. He was son of Mr. Haparam & Mrs. Mangli Devi.  He was enrolled in  Indian Army on 5th January 1995, in to 13th Grenadiers Battalion. He rendered  his most of service in eastern sector.

During 2002, Grenadier Bhagirath Karwasara was stationed in the Indian Army’s Milanpur Sector at Assam. He was challenged the fleeing terrorists who were with automatic fire and grenades. Gdr Bhagirath pursued the fleeing terrorists despite heavy automatic fire. In this action he sustained with gunshots on chin and chest. With his critical injuries, he charged at the terrorists who had been firing effectively at the party. Bleeding profusely he continued chasing and firing at the terrorist, ensuing the safety of the party. Till he attained martyrdom. his action totally charged the terrorists who ran away and Bhagirath was killed by the cordon party. An AK-56 rifle, ammunition and explosives were recovered from the terrorist.  His sacrifice paved the way for subsequent coordinated assault wherein all the militants were successfully neutralized.

The Citation to the Award reads him to:

On 8th June 2002 Grenadier Bhaggerath Karwasra was part of cordon and search operation launched in village Milanpur in Assam. Suddenly holed up terrorists broke through a hut and started feeling.

His daredevil action totally unnerved the other terrorist who ran haywire and was killed by the cordon party. one AK-56 rifile, ammunition and explosives were recovered.