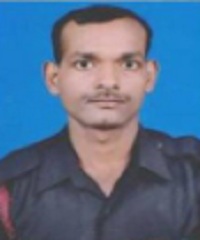 Place of Birth : Ghazipur , UP

Gnr Manoj K Kushwah hailed from Ghazipur district of Uttar Pradesh. He joined Indian Army and was deployed in the 57 Rashtriya Rifles, a regiment raised for counter insurgency operations and is currently deployed in Jammu and Kashmir.

During 2016, Gnr Manoj K Kushwah’s unit was operating in Machhil sector of Kupwara district in north Kashmir. On 22nd Nov 2016 Gnr Manoj and his colleagues were on patrol duty along the LoC. On that day Pakistani army’s Border Action Team (BAT) and Pakistan sponsered terrorists had made a sinister plan and were waiting in  hideout to ambush the Indian army’s contingent. On seeing the patrol team they started firing at them from their hiding place. In the unprovoked and surprise attack Gnr Manoj K Kushwah along with two other jawans was killed.

Gnr Manoj K Kushwah is survived by his wife and two kids.