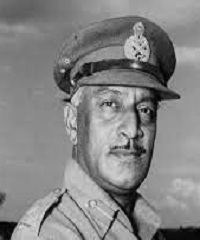 General Kodandera Subayya Thimayya hailed from Madikeri, the district town of Kodagu (formerly known as Coorg) in Karnataka on 31st March 1906. He was born in the family of coffee planters to Shri Subbaya Thimayya and Sitamma. His father Shri Subbaya, belonged to an affluent family from the Cheppudira clan and mother Smt Sitamma, was a well-known social worker, who also received the prestigious Kaisar-e-Hind Medal for her contributions to public service. Gen Thimayya was the second child and had two brothers (Ponappa and Somayya) and three younger sisters (Gangu, Dachu, Amavva) as siblings.  All the three boys of the family went on to become officers in the Indian Army.

General Thimayya initially studied from St. Joseph’s College in Conoor and later went to Bishop Cotton Boys School in Bangalore. After he left school at the age of fifteen, he enrolled in the Prince of Wales Royal Indian Military College, a newly set up institution to train young Indian cadets to join British Army’s prestigious academy, Sandhurst. His elder brother Ponappa later joined INA, younger brother Somayya joined Indian Army but unfortunately lost his life in a mine accident in 1947-48 during Kashmir operations. Following his graduation from RIMC, General Thimayya was one of the sixth Indian cadets selected for further training at the Royal Military College, Sandhurst.

After completing his training, he was commissioned into Indian Army on 4th Feb 1926 as a Second Lieutenant. General Thimayya was subsequently attached to the Highland Light Infantry, prior to the permanent posting with a regiment of the British Indian Army. He was soon posted to the 4th Battalion of the 19th Hyderabad Regiment (now known as Kumaon Regiment) on 28th May 1927, and was promoted to Lieutenant on 4th May 1928. General Thimayya honed his soldiering skills on that famous training ground in the Northwest Frontier, battling recalcitrant Pathan tribals.

In January 1935, General Thimayya got married to Ms Nina Cariappa from Bangalore. After the marriage they settled down at Quetta. Unfortunately there was a massive earthquake at Quetta that year. Smt Nina actively campaigned for the needs of the ones who suffered as a result of the earthquake. She was later awarded the “Kaisar-e-Hind” medal for her philanthropic work during this time. Meanwhile he got promoted to the rank of Captain on 4th February. On 20th March 1936, they were blessed with a daughter, who was named Mireille. On April 1936, he got posted as  Adjutant at the university training corps in Madras, where he spent four years.

After his tenure at University Training Corps, he got promoted to the rank of Major and spent the next two years at Singapore, where he successfully managed to stop a mutiny. In early 1941, he was promoted to the acting rank of Major, and at his request, was transferred to India in October. He was posted as the Second-in-command of a new raising at the Hyderabad Regimental Centre in Agra. He was then detailed to attend the staff college at Quetta where he and his wife had earlier made a name for themselves by selfless service during the 1935 Quetta earthquake. After the successful completion of the course, he was the first Indian officer to serve as GSO2 (Ops) of 25th Indian Division in Madras. The battalion soon moved to Burma to fight the Japanese army in the Second World War. In 1943, he was promoted as Commanding Officer of the same battalion, he was a part of in Agra. He was instrumental in leading a surprise attack on the Japanese soldiers, ensuring the safety of all Indian troops. The battalion advanced to other cities in Burma in the next two years to fight the Japanese troops. In 1945, he led the 36 Infantry Brigade, achieving a milestone of being the first Indian to do so. For his outstanding service in battle, he was awarded the much coveted Distinguished Service Order (DSO) and also a Mention-in-Dispatches.

General Thimayya represented the country during the surrender of Japanese in Singapore, followed by the surrender of Japanese in the Philippines. At the ceremony of Japanese surrender in Singapore, he signed on behalf of India. His innate talents of professional soldiering and leadership were soon recognized by Field Marshal Sir Claude Auchinleck, the Commander-in-Chief of the Indian Army. He was specially selected to lead the 268th Indian Infantry Brigade as part of the British Commonwealth Occupation force in Japan after World War II. He got this assignment due to his outstanding battle experience as a Brigadier and being the only Indian to command a battle formation in the field.

After the Partition Gen Thimayya returned to India in 1947 as a member of Indian Armed Forces Committee which was responsible to check the military weapons and other equipment that the British were leaving to India. After his stint at the committee, he became Major-General. His first responsibility as Major-General was to lead the 4th Infantry Division and to ensure the movement of people to India and Pakistan was peaceful. The following year the then Maj Gen Thimayya commanded the 19th Infantry Division in Jammu and Kashmir to chase Pakistani raiders off Kashmir.

Thereafter Gen Subayya Thimayya served as the commandant of the Prestigious Indian Military Academy, Dehra Dun. He was then selected by the United Nations to take part in the Neutral Nations Repatriation Commission in Korea. After the success of Neutral Nations Repatriation Commission task, he  returned to India and was promoted to General Officer Commanding, Southern Command, with the rank of Lieutenant-General, in Jan 1953. He had the privilege of being the General Officer Commanding in Chief (over separate tenures) of all the three Commands that existed at the time i.e. Southern, Eastern and Western. He also became the first Indian Colonel of the Kumaon Regiment from 1st Jan 49 to 8th May 1961. In 1953 he was awarded “Padma Bhushan” for his outstanding service to the nation.

Gen Subayya Thimayya assumed the charge of Indian Army, as the 6th Chief of the Army Staff, on 7th May 1957. He then briefly resigned his post in 1959 over a dispute with Shri V K Krishna Menon, the Minister of Defence that time. However Prime Minister Jawaharlal Nehru refused to accept his resignation and persuaded him to continue. Completing 35 years of distinguished military service, he retired from the Army in the year 1961.

Gen Thimayya spent his retired life with his wife and daughter at his mansion, Sunny Side, at Mercara. When India lost the war in 1962, a defence council was formed to discuss important matters about India’s defence. Gen Thimayya was made one of the members of this council. Though he gave a lot of suggestions to the government, the council never really took off and the meetings soon became occasional. In 1964, the United Nations approached Gen Thimayya to command the UN Forces in Cyprus to manage the post-independence conflicts in Cyprus. However while discharging the duties as the Commander of UN Forces in Cyprus (UNFICYP) he, unfortunately, suffered a heart attack and died on 18 December 1965.