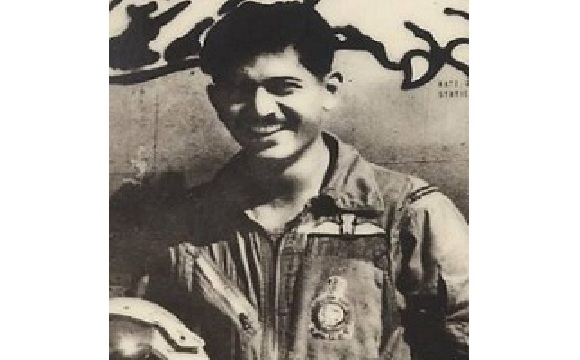 Son of a professor Dr Prafulla Chandra Guha, Flt Lt Babul Guha did his schooling from St Joseph's Boys High School Bangalore. Subsequently he got selected to join the Air Force and was commissioned on 1st Apr 1956. He joined the flying stream of the IAF and got trained as a fighter pilot as part of 68th Pilots' course. By 1965, Flt Lt Babul Guha had put in nearly 9 years of service and developed into a committed soldier and professionally competent fighter pilot. Later Flt Lt Babul Guha got posted to PTE (Pilot’s Training Establishment) as a flying instructor to train the young IAF pilots.

After serving for few years Flt Lt Babul Guha got married to Ms Swapna and the couple had a son Arindam. As the war with Pakistan broke out in 1965 the pilots of PTE were sent to various forward IAF basis to take part in air operations against the enemy.

During 1965, Flt Lt Babul Guha was serving with 1 Sqn, known as "Tigers". No.1 Squadron Air Force was raised on 01 April 1933 at Drigh Road, Karachi and equipped with 04 Westland Wapiti aircraft. The Indian element that time consisted of 06 officers and 09 technicians then known as Hawai Sepoys. On the historic day of 16th March, 1939 Flt Lt Subroto Mukherjee took over the Command of the Squadron from Sqn Ldr CH Smith, thus becoming the first Indian to Command a flight, a Squadron, later a Station and finally, the Indian Air Force itself. The squadron took part in "Operation Vijay" for the liberation of Goa in 1961 under the command of Sqn Ldr S Bhattacharya and equipped with Mystere-IVa aircraft. In 1963, the squadron moved to Adampur, an airbase that was to remain its home for the next 17 years. When hostilities broke out in 1965 the unit under the command of Wg Cdr OP Taneja undertook various offensive air operations. Flt Lt Babul Guha was tasked for one such operation on 07 Sep 1965.

At the height of 1965 war No.1 squadron which was operating Mystere aircraft from Adampur airbase, was entrusted to attack the highly fortified Sargodha air base of Pakistan Air Force. Sargodha airbase located west of Lahore hosted the headquarters of the Central Air Command, one of the three combatant air commands of the PAF. The base was the hub of PAF effort during the war. On 7th Sept the IAF mounted 33 sorties against the heavily guarded PAF complex at Sargodha. The commanding officer of the squadron, Wg Cdr OP Taneja decided to launch a wave of sorties on 7th September. In their pre-dawn mission, they successfully attacked the Sargodha airfield albeit one of the pilots, Sqn Ldr AB Devayya, lost his life before shooting down a PAF’s F-104 aircraft.

Flt Lt Babul Guha was part of the two Mystere aircraft strike mission which went to Sargodha airfield in the afternoon. He and the other pilot had to face the alert PAF’s aerial as well as ground-based forces. While the aircraft flown by the other pilot was shot down by the ground forces, Flt Lt Babul got engaged in a dogfight with the aircraft flown by PAF’s pilot Flt Lt Malik. At around 1540 hours, during the dogfight, Flt Lt Babul’s aircraft got shot by a deadly sidewinder missile fired from adversary’s F-86 Sabre jet.  Though Flt Lt Babul Guha was officially declared Killed (presumed) in Action (KIA) on 07 Sep 1965, he is presumed to have been taken over as a POW (Prisoner of War). Shri Mukhatyar Singh, who was repatriated from Pakistan on July 5, 1988, reportedly said that Flt Lt Babul Guha was in Kot Lakhpat Jail at that time. However, successive regimes in Pakistan have denied the existence of Indian POWs in its jails. Presently, Flt Lt Babul Guha's name features on the official list of the ’54 Personnel Missing in Action’, tabled in the Lok Sabha in 1979 by the then Minister of State of External Affairs Shri Samarendra Kundu.