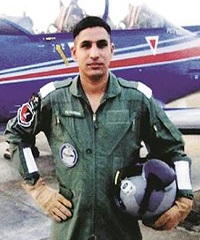 Flying Officer Pankaj Nandal was born on February 13, 1991, to an IAF veteran Krishna Nandal and Usha Devi, a family of dedicated defense personnel. The family hailed from Nandal village in Rohtak district of Haryana.

Flying Officer Pankaj Nandal, after completing his initial schooling from local school in Rohtak, completed his B Sc in aeronautical science from Chennai. Like his father, he too wanted to join the Air Force and in January 2013 he cleared the Combined Defence Services Exam and was selected to join the IAF. During his training at the Air Force Academy, Dindigul, Hyderabad, he was trained as a transport pilot. After completion of his initial training, Pankaj Nandal was commissioned as Flying Officer and joined 33 Squadron AF.

On 22 July 2016, IAF 33 Squadron was tasked to carry men and material from Chennai to the Air Force station at Port Blair in The Andaman and Nicobar Islands. An upgraded AN-32, a twin-engine turboprop transport aircraft, belonging to 33 Squadron, was pressed in the service for the assigned task. The aircraft, with 29 people on board, including six crew members, 11 Indian Air Force personnel; two Indian Army soldiers; one each from the Indian Navy and Indian Coast Guard; and eight defence civilians working with Naval Armament Depot (NAD) and the material load, took off from Tambaram Air Force Station in Chennai at 8.30 am and was expected to land at Port Blair in the Andaman and Nicobar Islands at 11.30 am. Flying Office Pankaj Nandal was one of the pilots of AN-32.

At 9.12 a.m. i.e. around 42 minutes after takeoff and about 151 nautical miles east of Chennai, the aircraft lost contact with the ground radar and went missing. This disappearance kicked off India’s biggest search operation for a missing plane on the sea.  Despite massive search operation conducted jointly by the Navy, Indian Air Force and the Coast Guards, the aircraft and the passengers on board could not be traced.  The aircraft was not fitted with an underwater locator beacon, which made the search operations very difficult. Even scanning of data from Indian satellites failed to locate the missing aircraft. On 15 September 2016, the search and rescue mission was called off and all 29 people on board were presumed dead.

Flying Officer Pankaj Nandal, coming from the defense background, was a dedicated soldier with deep desire to serve the nation. However, his life was cut short and a committed soldier was lost in the line of duty.