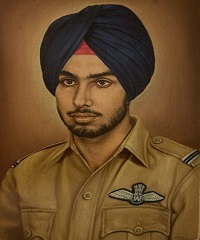 Flying Officer Jagdev Singh Brar hailed from Punjab and was born in the year 1943. Son of Shri Ajaib Singh Brar and Smt Balwant Kaur, Fg Offr Jagdev had five brothers Surinder, Amarjit, Surjit, Sukhdev & Harpal and sister Davinder as his siblings.  Following the family tradition,(His three brothers and brother-in-law served in the Armed Forces) Fg Offr Jagdev too wanted to serve in the Armed Forces since his younger days. Eventually he got selected to join the NDA and was commissioned on 09 Mar 1963 at the age of 20 years.

He joined the flying stream of the IAF and got trained as a fighter pilot as part of 83rd Pilots' course. By 1965, he had put in barely 2 years of service when the war with Pakistan broke out and he got involved in active operations very early in his service career. Fondly called as "Big Ben" by the Squadron mates, Fg Offr Jagdev was very well behaved and popular among his colleagues in the Air Force.  He was a keen sportsman too and excelled in various games including badminton, tennis and table tennis.

During 1965,  Fg Offr Jagdev Singh Brar was serving with No. 7 Squadron, flying Hawker Siddeley Hunter fighter-bombers. The squadron had a long operational history stretching back to the Burma Campaign of World War II.  No.7 Squadron was formed on 01st December 1942 at Vizagapatnam under the command of Sqn Ldr Hem Chaudhuri. In early 1961, 7 Squadron equipped with Hunters was based at Palam airbase in New Delhi. In 1965, the Squadron known as "Battle Axes" was operating flying Hawker Siddeley Hunter fighter-bombers. In 1965, as fighting flared up in the Chamb sector on 1 Sep, the squadron was called upon to carry out its first offensive sorties on the morning of 6th Sept, when numerous sorties were flown against 'Targets of Opportunity' in support of the Indian army's offensive across the International border. Hunters of different squadrons were clubbed together at Halwara and missions flown consisting of mixed formations. Fg Offr Jagdev Singh Brar was part of a number of missions and played a crucial role in meeting the war time objectives of the Squadron.

As part of continuing air offensive, 7 squadron was entrusted to attack the highly fortified Sargodha air base of Pakistan Air Force. Sargodha airbase located west of Lahore hosted the headquarters of the Central Air Command, one of the three combatant air commands of the PAF. The base was the hub of PAF effort during the war. On 7th Sept the IAF mounted 33 sorties against the heavily guarded PAF complex at Sargodha. The commanding officer of the 7 squadron, Wg Cdr OP Taneja decided to launch a wave of sorties on 7th September. Fg Offr Jagdev Singh Brar was tasked for one such mission to strike Sargodha airbase on 07 Sep 1965.

Led by Wg Cdr Zacharaiah, five Hunters took off on on that day, to strike the Sargodha airbase in the early morning of 07 Sep 1965. Fg Offr Jagdev and Sqn Ldr Sureshchandra Bhaskar Bhagwat were flying in an escort role of the mission. However the Hunters were intercepted enroute by enemy fighters. The mission was aborted, but escorts, flown by Sqn Ldr SB Bhagwat and Fg Offr JS Brar engaged the enemy aircraft. In the ensuing air combat Fg Offr Jagdev's aircraft got hit and crashed somewhere near Sangla Hill, a tehsil in the Nankana Sahib district of the Punjab Province of Pakistan. Fg Offr Jagdev Singh Brar was a gallant and committed air warrior, who laid down his life at the age of 22 years in the service of the nation.