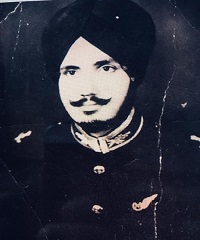 Flying Officer Jagat Singh Toor hailed from Punjab and joined the Indian Air Force after completing his school education. He was commissioned on 18 Apr 1964 the flying stream of the IAF. He got trained as a navigator as part of 27th NAV Course. After completing his flying training, he got posted to an operational flying squadron flying Dakota aircraft. During 1965 he was serving with No 2 Transport Training Wing (TTW) based at Yelahanka, in Bangalore.

During 1965, Fg Offr Jagat Singh Toor was serving with 2 Transport Training Wing (2 TTW) based at Air Force Station Yelahanka in Bangalore. Initially formed as a conversion and training squadron at Agra in 1948, it moved over to Begumpet in 1957 and was renamed as Transport Training Wing (TTW). In 1963 after the Sino -Indian conflict, the necessity for expanding training on transport aircraft became imperative. To facilitate this requirement; existing TTW was retained at Begumpet and No.2 TTW was established at Yelahanka, in Bangalore, where an airfield of world war II vintage was already in existence. This airfield was re-commissioned after necessary repairs on August I, 1963 and began functioning under the command of Gp Capt PL Dhawan. However as the war with Pakistan in 1965 flared up in the Chamb sector on 1 Sep, 2 TTW with Group Captain John Francis Lazaro as its commanding officer was called upon to carry out various air support operations. Fg Offr Jagat Singh Toor as a navigator with Sqn Ldr Asit Kumar Ghosh as his captain was tasked for one such operation on 07 Sep 1965.

The operational task assigned to Fg Offr JS Toor was an air supply mission in Dakota C-47 aircraft with Sqn Ldr Asit Kumar Ghosh as the captain of the aircraft. On 07 Sep 1965, Sqn Ldr Ghosh along with his navigator Fg Offr Toor took off as planned after carrying out the pre-flight checks.  The aircraft was carrying Naval munitions from Naval Station at Cochin to Jamnagar. However the aircraft developed serious snag on the way, making the aircraft uncontrollable. Eventually the aircraft crashed over Baba Budan range near Mangalore. As a result Sqn Ldr Ghosh & Fg Offr Toor could not survive the crash and were martyred. Fg Offr Jagat Singh Toor was a young committed air warrior who laid down his life in the line of his duty.