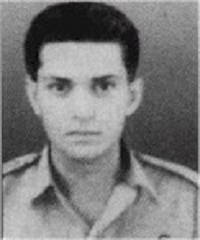 During 1965, Fg Offr Bunsha was serving with 20 Sqn and  was of the one of the junior most pilots of the unit, having less than two years of service and about 250 hours on the Hunter. However as the war escalated Fg Offr Bunsha was deputed to serve with 7 Sqn based at Air Force station Halwara in Punjab. On September 16th, No.7 Squadron went into action against the Pakistani Sabres on the Amritsar front. The Hunters from Halwara had not seen air combat since the evening of September 6th but that was soon to change. Late in the afternoon on 16 Sep 1965, at Halwara, Fg Offr Prakash Sadhashivrao Pingale of 7 Squadron was on ORP duty along with Fg Offr Farokh Dara Bunsha.

As an air attack by Pakistani Air Force was detected, a scramble order was given to 7 Sqn ORP and both pilots took off in their Hunters. Once airborne, the fighter controller Fg Offr RC Mahadik gave Fg Offr Pingale an initial vector in a northwesterly direction towards Jallundhur. They were flying at 20,000 feet altitude at high speed – nearly 0.9 Mach – with eyes preened to spot intruding aircraft. The intruders were two Sabres led by Sqn Ldr MM Alam with Fg Offr MI Shaukat of PAF. The Indian pilots Fg Offr Bunsha and Fg Offr Pingale were flying the fighting formation, ‘loose deuce’, which was a well-established battle formation for air combat.

Soon, Fg Offr Pingale spotted a single aircraft coming from the opposite direction at a lower altitude. As it flew almost directly beneath them, Fg Offr Pingale recognized the green and white PAF roundels and it turned out to be Sqn Ldr Alam’s Sabre aircraft. Fg Offr Pingale called Fg Offr Bunsha on the R/T to announce the attack and consequently both the hunters peeled off and turned around in a dive. With the Hunters in a turn, the Sabre deliberately put in a turn from southeastern direction to south. As both the Hunter pilots approached the Sabre from the rear, it was still flying straight and maintaining constant altitude without taking any any evasive actions.

Fg Offr Pingale saw the Sabre coming out of the sun from the right and immediately increased power. He could see the Sabre’s leading edge slats open and knew the aircraft was going to turn tightly.  Fg Offr Pingale’s first burst at the Sabre missed the aim causing no damage to the aircraft. But he had closed in to around 250-300 yards and took a shot again achieving a direct hit causing the Sabre to explode in a massive ball of flame. In the meantime,  Fg Offr Bunsha was chasing Sqn Ldr Alam who started jockeying his Sabre in. Fg Offr Pingale who was chasing Fg Offr Ali, had an eye on Fg Offr Bunsha and his target. As Fg Offr Pingale saw Sabre maneuver, he called out a warning to  Fg Offr Bunsha, which was acknowledged. As a result the chase transformed into a horizontal scissors fight with both the Sabre and Hunter cutting speed and turning inside into each other in an effort to get behind each other.

However during the fight that followed Pakistani Sabre cut inside Fg Offr Bunsha’s turn and was able to take a shot at the Hunter. Fg Offr Bunsha’s Hunter got damaged by the gunfire, and crashed. Fg Offr Bunsha probably did not get enough time to eject and went down with this aircraft. Fg Offr Bunsha attained martyrdom while fighting bravely and daring to take on enemy with his raw courage and daredevilry. Fg Offr Farokh Dara Bunsha was a valiant soldier and a committed air warrior, who laid down his life in the line of his duty, following the highest traditions of the Indian Air Force.