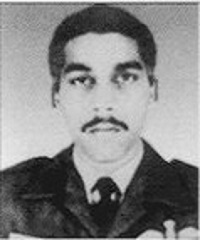 Flight Lieutenant Vijay Vasant Tambay after completing his schooling joined the 23rd NDA course and was commissioned into the IAF as a pilot officer on 28 Oct 1963. He was selected for the flying branch in the IAF and was trained as a fighter pilot. After completing his flying training, Flt Lt Tambay served with various flying squadrons located at different Air Force bases. By 1971, Flt Lt Tambay had put in about 8 years of service and evolved into an ace fighter pilot having expertise in various air operations.

However, Flt Lt Tambay in a bid to cause maximum damage to the target airfield, flew dangerously close to enemy air defense batteries and was shot down by anti-aircraft guns. Flt Lt Tambay was declared “Killed In Action”(KIA) on 05 Dec 1971. However, a confusion continued to persist about his death, as some of the Prisoners Of War (POW) lodged in a Pakistani jail, later informed about the presence of Flt Lt Tambay in Pakistani Jail. The Dawn newspaper of Pakistan had published front page news stating that Flt Lt “Tomboy” had been shot down and captured. Flt Lt Tambay had “Tomboy” written on his flying helmet, which explained the news headline. Pakistan, however never acknowledged the presence of Flt Lt Tambay in a Pakistani jail.