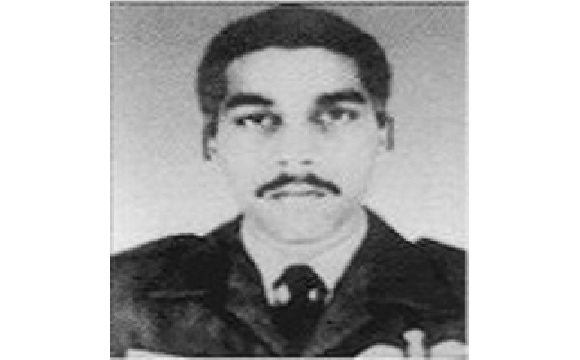 Flight Lieutenant Vijay Vasant Tambay hailed from Nagpur in Maharashtra and was born on 11 Apr 1943. After completing his schooling he got selected to join the prestigious NDA. He joined the 23rd NDA course and passed out on 01 Dec 1962. He was commissioned into the IAF as a pilot officer on 28 Oct 1963. He was selected for the flying branch in the IAF and was trained as a fighter pilot as part of 85th Pilots' course.

After completing his flying training, Flt Lt Tambay served with various flying squadrons located at different Air Force bases. After serving for a couple of years he got married to Ms Damayanti Subedar a national level badminton player from Allahabad in April 1970. Smt Damayant Tambay went on to win her third national title after marriage and later received the prestigious "Arjuna Award" too. By 1971, Flt Lt Tambay had put in about 8 years of service and evolved into an ace fighter pilot having expertise in various air operations.

In December, 1971, Flt Lt Tambay was serving with 32 Squadron which was operating SU-7 fighter aircraft. The 32 Squadron was raised at Jodhpur on 15 October 1963 with Wing Commander Emanuel Raymond Fernandes as its first commanding officer. Initially it was equipped with Mystere aircraft but the Squadron later got converted and graduated to supersonic era with SU-7 aircraft and shifted its base to Ambala. In response to the preemptive strikes by the Pakistan Air Force on Indian Air bases on 03 Dec 1971, the IAF launched operations against the Pak Air Force. As part of the IAF operations, 32 Sqn with Wing Commander Harcharan Singh Manget as its commanding officer took part in numerous missions against Pakistani targets. By 04 Dec 1971, Flt Lt Tambay had already undertaken two missions deep inside Pakistan against its air bases. On 05 Dec 1971, Flt Lt Tambay was tasked to be part of the mission that was to attack the Pakistani air base at Rafique.

Flt Lt Tambay took off in his SU-7 (B-839) as planned for his 3rd such sortie within two days against the Pakistani airbase. It was a two aircraft mission with Sqn Ldr VK Bhatia as No1 and Flt Lt Tambay as No 2. The TOT(Time over Target) given to the pilots was around midday as the enemy defences were expected to be at a low key at that time. Both aircrafts reached the target airfield as planned and carried out the first attack. As the target was important was for the enemy, it was defended heavily by their air defence assets. During the second attack Flt Lt Tambay in a bid to cause maximum damage to the target airfield, flew dangerously close to enemy air defense batteries and was shot down by anti-aircraft guns. Flt Lt Tambay was declared “Killed In Action”(KIA) on 05 Dec 1971.

However, a confusion continued to persist about his death, as some of the Prisoners Of War (POW) lodged in a Pakistani jail, later informed about the presence of Flt Lt Tambay in Pakistani Jail. The Sunday edition of 'Pakistan Observer', then published from Dhaka reported on 05 Dec 1971 that five Indian pilots had been captured and one of them was Flt Lt Tomboy a presumed distortion of Tambay. Later his wife Smt Damayanti during her search for her husband found many leads/evidences that gave credence to the fact that Flt Lt Tambay was being kept as a POW in Pakistan. Pakistan, however never acknowledged the presence of Flt Lt Tambay in a Pakistani jail. Presently, Flt Lt VV Tambay’s name features on the official list of the ’54 Personnel Missing in Action’, tabled in the Lok Sabha in 1979 by the then Minister of State of External Affairs Shri Samarendra Kundu.