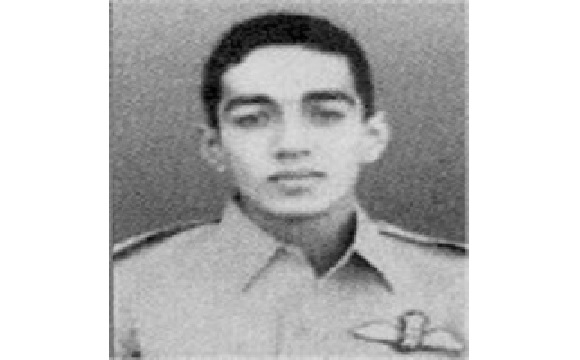 Flight Lieutenant Vijay Kumar Wahi was born on September 17, 1945 in Montgomery district of former Punjab province of British India, now in Pakistan. His father Major J L Wahi served in the Royal Indian army, which captured the imagination of his son and inspired him to join the Indian Army. Eventually he got selected to join the prestigious NDA after his schooling. He was commissioned into the Indian Air Force on 13 March 1966 at the age of 20 years.

He was commissioned in the fighter stream of the IAF and got trained as a fighter pilot. After completing his flying training, he served with various flying squadrons located at different Air Force bases. By 1971, Flt Lt Vijay Kumar Wahi had put in about 5 years of service and evolved into a professionally competent fighter pilot having expertise in various air operations.

In December, 1971, Flt Lt Vijay Kumar Wahi was serving with 101 Squadron which was operating SU-7 fighter aircraft. The 101 Squadron was raised as a photo reconnaissance flight at Palam on 1 May 1949. Four Harvards, two Spitfires, eight pilots and fifty five airmen formed the Squadron that time with Flight Lieutenant John Frederick Shukla as its commanding officer. In 1957, the Squadron converted to Vampire aircraft and shifted its base to Adampur. The Squadron graduated to supersonic era with SU-7 ac in June 1968.  As the PAF attacked 11 Air Force bases on 03 Dec 1971, the Indian Air Force decided to launch counter offensive operations on the eastern as well as western front. 101 Sqn with Wing Commander Kailash Chandra Khanna as its commanding officer was tasked to undertake various offensive air missions against the targets on the western front. Flt Lt Vijay Kumar Wahi was was tasked for one such offensive mission on 06 Dec.

On the 6th December 1971, Flt Lt Wahi was detailed as number two in an Air to the Ground mission to Chhamb area. The target was heavily defended by anti aircraft guns and enemy aircraft but the destruction of this target was of vital important to our ground forces which were under heavy pressure. Without caring for his own safety, Flt Lt Wahi pressed home the attacks and knocked out two enemy tanks. However while returning from the mission, his aircraft was hit, which made it uncontrollable. He ejected but sustained fatal injuries and was martyred. Flt Lt Wahi was was a valiant soldier and committed air warrior, who laid down his life at the age of 26 years in the line of his duty. Flt Lt Vijay Kumar Wahi was given the gallantry award, “Vir Chakra” on 26 Jan 1972 for his outstanding bravery, devotion to duty and supreme sacrifice.

The Citation for the Vir Chakra award to him reads:-

During the operations against Pakistan in December, 1971, Flight Lieutenant Vijay Kumar Wahi was a pilot in a Fighter-Bomber Squadron. On the 6th December, 1971, he was detailed as number two in an Air to Ground mission to Chhamb area. The target was heavily defended by anti aircraft guns and enemy aircraft but the destruction of this target was of vital important to our ground forces which were under heavy pressure. He pressed home the attacks and knocked out two enemy tanks. While returning from the mission, his aircraft was hit and he ejected sustaining fatal injuries.