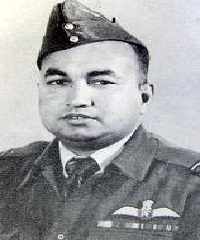 During 1952 Flt Lt Biswas was serving with Communication Flight under HQ Training Command of the IAF. This unit was responsible for ferrying  senior officers and other high officials for various operations. On the 3rd of February, 1952, the U. P. Area command of the Indian Army was holding a tactical Exercise in Lucknow. A number of high ranking Army Officials from various places had gathered to witness the Exercise. After the completion of the Exercise Flt Lt Biswas was given the task of ferrying back six senior officers of the Army to Delhi.

The Devon aircraft piloted by Flt Lt Biswas took off at 1800 hrs , but moments after the aircraft took off, the crew observed the port engine was spewing smoke and soon a fire broke out. The Devon aircraft became difficult to control and as the fire kept creeping towards the main fuselage, Flt Lt Biswas, put the Devon in a dive in an attempt to reduce altitude and attempt a crash landing before the aircraft fuel reserves could catch fire . As the Devon was put into the dive, the aircraft shuddered in the airflow and the Engine mounting broke away, resulting in the burning engine separating from the wing and falling off. Flt Lt Biswas leveled the aircraft and belly landed successfully at a village near the Sandilla Railway Station. All the occupants walked out of the crashed aircraft unhurt with the pilot being the last to leave.

Flt Lt Suhas Biswas was awarded the “Ashoka Chakra” , and became the first Air Force Officer to get the coveted award. The recognition to Flt Lt Biswas was given for the presence of mind, skill and courage in maintaining the stricken aircraft and saving the lives of many senior Army officers, which included two future Army Chiefs and an Army Commander. The then Air Force Chief, Air Marshal Subroto Mukerjee, had the passenger chairs removed from the wrecked Devon and presented it individually to each of the survivors of the crash with a Brass Plate mentioning the circumstances of the crash.

On September 01 in 1957, Flight Lieutnant Suhas Biswas was flying Dakota aircraft on an operational mission and ferrying men and material to Mangalore. After take off the weather started packing up and visibility became very low. The aircraft had to be flown through western ghats in low stratus clouds and constant drizzle. Despite heroic attempts by Flt Lt Biswas the aircraft lost contact with the ground control and crashed. Flt Lt Biswas lost his life and a committed and brave soldier was lost in the line of duty.

On Sunday, the 3rd February 1952, a Devon Aircraft carrying six passengers, which included the Army Commander, Western Command, the Chief of the General Staff, the QuarterMaster General, one Divisional Commander, the Military Secretary and the Deputy Director of Supplies and Transport, Army Headquarters, was piloted by Flight Lieutenant Suhas Biswas on a flight from Lucknow to Delhi. Soon after the aircraft left Lucknow at about 1800 hours, the port engine developed serious trouble and caught fire. Flight Lieutenant Biswas tried hard to extinguish the fire but without success; so he immediately decided to force land.

It was then getting dark but there was just sufficient light to choose a flat piece of ground. During the descent from 6,000 feet, the burning port engine fell out and the aircraft got out of control but Flight Lieutenant Biswas soon succeeded in bringing the aircraft under control. He then switched off the only engine functioning, and made a successful belly landing under the worst conditions, thus averting a major disaster.

Fully realizing the gravity of the situation and in the face of certain disaster, Flight Lieutenant Biswas’s  demeanor and behavior in the plane was inspiring. At no time did he show that he was not in complete control of the situation. His presence of mind when the plane caught fire, skillful navigation of the plane when the engine had fallen out and his courage in landing the plane on reconnoitered ground in twilight showed leadership of the highest order and set a magnificent example of extreme devotion to duty.