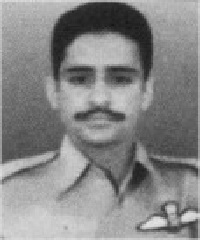 Flt Lt Sudesh Kumar Chibber was born on 28 Mar 1943. He was commissioned into the Indian Air Force on 16 Oct 1965 at the age of 22 years. He joined the flying stream of the IAF and got trained as a fighter pilot. After completing his flying training, he served with various flying squadrons located at different Air Force bases. By 1971, he had put in around 5 years of service and evolved into a professionally competent fighter pilot having expertise in various air operations.

During 1971, Flt Lt Sudesh Kumar Chibber was serving with 108 Sqn, known as “Hawkeyes” and was based at Air Force Station Pathankot. 108 Squadron of the Indian Air Force was formed at AF Station Halwara on 20 Nov 1959 and was equipped with Vampire jets. In Nov 1968 the Squadron got converted to Su-7 aircraft becoming the first supersonic strike Squadron of the Indian Air Force. As the war broke out on 03 Dec 1971 with Pakistan, the Squadron undertook various offensive air missions. Flt Lt Sudesh Kumar Chibber was tasked to undertake one such operation on 10 Dec 1971.

As part of the ongoing operations, 108 Sqn was tasked for a number of interdiction missions. On 10 Dec 1971, Flt Lt Chibber was assigned the task of attacking Mandi Sadiq Ganj railway complex which was an important railway junction and militarily significant target for India. As planned Flt Lt Chibber took off in the morning of 10 Dec and reached the target area as per the given TOT (Time Over Target). As the target was important for the enemy, it was heavily defended by the anti-aircraft guns. Despite the threat of enemy air defence assets, Flt Lt Chibber went for the attack. However his aircraft received direct hits from the anti-aircraft guns and got severely damaged. Eventually the aircraft crashed and Flt Lt Chibber went down with the aircraft and was martyred. Flt Lt Chibber  was a valiant soldier and committed air warrior, who laid down his life at the age of 28 years in the line of his duty.