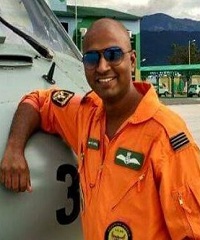 Flt Lt Pramod Kumar Singh and Wg Cdr Mandeep Singh Dhillon carried out 5 sorties during the day rescuing over 100 people trapped in remote areas. As the day progressed the weather deteriorated further making the task of the flying crew riskier. When Flt Lt Pramod Kumar Singh and Wg Cdr Mandeep Singh Dhillon came for their sixth sortie the weather had turned hostile to the extent that they decided not to take the civilians on-board and risk their lives. The ALH took off for the return journey only with flying crew but  the helicopter lost communication with the ground — the Air Traffic Control (ATC) in Chabua in Assam, minutes after it took off from Sagalee village. It was evacuating people from Sagalee to the helipad at Naharlagun near Itanagar. The rescue teams of the Indo-Tibetan Border Police (ITBP) and the Arunachal Pradesh Police were formed to trace the helicopter but the rescue operation was called off due to the bad weather. The wreckage of the helicopter was found on Wednesday 5 July 2017 in Sopo Yuha, near Hostalen village, about 30 Kms from Itanagar.