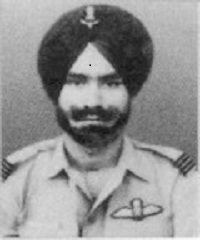 Flt Lt Harvinder Singh hailed form Punjab and was born on 11 Nov 1945. He was commissioned into the Indian Air Force on 16 May 1965 at the age of 19 years. He joined the flying stream of the IAF and got trained as a fighter pilot as part of 92nd Pilots' course.

After completing his multi-stage flying training, he served with various flying squadrons located at different Air Force bases. By 1971, he had put in around 6 years of service and evolved into a professionally competent fighter pilot having expertise in various air operations.

During 1971, Flt Lt Harvinder Singh was serving with 222 Sqn, known as “Tigersharks” and was based at Air Force Station Ambala. 222 Squadron was raised at Ambala on 15 Sep 69 with Wing Commander Allan Albert Da Costa as its first commanding officer. The Squadron moved to Halwara in Jul 71 and was soon engaged in active combat operations in the 1971 war.  As the war broke out on 03 Dec 1971 with Pakistan, the Squadron undertook various offensive air missions. The Squadron launched counter air strikes against Risalewala and Chander Airfields with immense success despite stiff enemy opposition. It also undertook Close Air Support missions centered around Dra-Baba-Nanak, Husseinwala and Firozpur sectors. A number of strikes were launched by the squadron against enemy armour, gun positions and troops which virtually paralyzed the armour thrust. Flt Lt Harvinder Singh was tasked to undertake one such offensive operation on 04 Dec 1971. The operation was a mission to attack Risalewala airfield.

On 04 December 1971, Flt Lt Harvinder Singh his Sukhoi-7 (B-849) took off as planned for the mission from Ambala. As the target was important for the enemy, it was heavily defended by the anti-aircraft guns and air defence aircraft. Despite the threat of enemy air defence assets, Flt Lt Harvinder Singh went for the attack. However his aircraft was believed to have been hit by ground based anti aircraft guns. The aircraft took direct hits and crashed in the enemy territory. His name was announced by Pakistan Radio on December 5, 1971 as having been captured.  He is presumed to have been taken over as a POW (Prisoner of War). However, successive regimes in Pakistan have denied the existence of Indian POWs in its jails. Presently, Flt Lt Harvinder Singh's name features on the official list of the ’54 Personnel Missing in Action’ tabled in the Lok Sabha in 1979 by the then Minister of State of External Affairs Shri Samarendra Kundu.