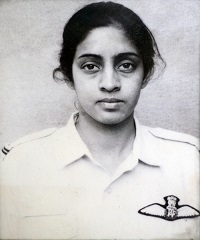 Flt Lt Harita Kaur hailed from Punjab and was born on 10 Nov 1971 in Chandigarh in a military family. Daughter of an Army veteran Col Ranbir Sing Deol, Flt Lt Harita Kaur grew up to be an independent and confident woman. She came from a family, wherein many of her relatives served in the Indian Air Force, and thus her fascination with the IAF grew along with her age. Her joys knew no bounds, when the IAF in the early 90s invited women to join as pilots. She graduated from MCM DAV college for women, Chandigarh and applied for selection in the IAF. Eventually she became one of first seven women cadets inducted into the Air Force as Short Service Commission (SSC) officers, following a rigorous selection and training that started in 1992. This also marked a critical phase in training of women in India as a transport pilots.

She got commissioned on 17 Dec 1994 as a Flying Officer  and got trained as a transport pilot as part of 1 SSC (W) FP Course. After initial training at Air Force Academy, Dundigul near Hyderabad, she received further training at Air Lift Forces Training Establishment (ALFTE) at Yelahanka Air Force Station in Bangalore. On 2 September 1994, Flt Lt Harita Kaur, at the age of 22 years, became  the first Indian woman to fly a solo in an Avro HS-748 aircraft. She created history when she kissed the clouds at a massive height of 10,000 feet, which indeed was an momentous occasion for Indian Air Force too. Flt Lt Harita was adventurous and passionate about flying and soon developed into a competent pilot.

During Dec 1996, Flt Lt Harita Kaur was serving with Navigation and Signals School (N&SS) now known as Navigation Training School located at Air Force Station Begumpet in Hyderabad. The unit was operating HS-748 Avro aircraft, a twin-engine turboprop military transport and freighter of British origin. The aircraft, which could carry 48 paratroopers or six tonnes of freight, was inducted in the IAF fleet in the 1960s. On 24 Dec 1996, Flt Lt Harita Kaur was assigned an operational task as a co-pilot with Flt Lt KS Kumara Krishnan as captain of the aircraft.  On that day, after the Passing Out Parade (POP) at Air Force Station Tambaram, the No 3 Airforce Band had to be flown back to Hyderabad. Flt Lt Harita Kaur along with Flt Lt KS Kumara Krishnan as captain took off from Chennai in her HS-748 Avro aircraft ( H-1032) as planned.

After getting airborne in the evening, they covered half the distance and were over Nellore district of Andhra Pradesh, when some emergency was noticed. Flt Lt Harita Kaur and Flt Lt KS Kumara Krishnan tried to take emergency measures to control the aircraft but did not succeed.  Very soon thereafter, the aircraft dived and crashed in to ground near Dubagunta village. The crash apparently resulted from fatigue failure of the support of the right engine’s jet pipe. It dipped down and damaged the fuel pipeline leading to fire and fracture of the right wing.  In this ill fated crash Flt Lt Harita Kaur and Flt Lt KS Kumara Krishnan lost their lives along with 22 other personnel. Thus the life of a fine Air Force officer and a committed soldier was lost in this unfortunate accident. Flt Lt Harita Kaur Deol had achieved the distinction of becoming the first Indian woman to fly a solo flight in the IAF but unfortunately also became the first woman Air Force pilot to die in harness in the line of her duty.