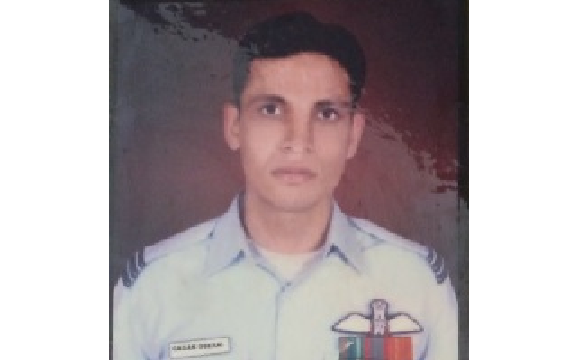 Flt Lt Gagan Oberoi hailed from Meerut district in Uttar Pradesh and was born on 25 Sep 1976. Son of Mr. D.K. Oberoi who worked at Ordnance Factory in Itarsi,  Flt Lt Gagan got selected to join the prestigious NDA after his schooling and joined the 162nd course. He got selected for the Indian Air Force and was commissioned into the IAF as a fighter pilot. After completing his flying training Flt Lt Gagan got posted on December 19, 1998, to 5 Squadron, operating Jaguar aircraft.

Soon Flt Lt Gagan gained expertise in various air operations and took part in many operational exercises. Later in March 2002, he got married to a fellow officer Flt Lt Nidhi Aggarwal. By the year 2004, Flt Lt Gagan had put in over 5 years of service and developed into a dedicated and professionally competent air warrior.

Based on the intended flight path and the last known coordinates, the possibility of missing warplanes straying into the Pakistani side was ruled out. The preliminary inquiry indicated that sudden deterioration in weather could have been responsible for the accident involving two Jaguar aircraft.  The massive search and rescue operation launched by the IAF, Army, and local police had to be called off due to the failing light and bad weather, which also prevented the use of helicopters in the rescue operations. Later, the teams continued the salvage operations in the area to locate the pilots and flight data recorder of the aircraft to ascertain the cause of the crash.

Finally, the warplanes’ wreckage and the body of Flt Lt Gagan Oberoi were found in inhospitable mountainous terrain at an altitude of 4,000 meters about 60 km away from Srinagar. The body of Flt Lt Mayank Mayur was recovered the next day about 4 km away from the wreckage of the first aircraft.  The flight data recorder of one of the jets was also found. Both the pilots were found in their flying seats which indicated that they did not get the time to eject. Flt Lt Gagan Oberoi was a dedicated soldier and a committed air warrior who laid down his life in the service of the nation following the highest traditions of the IAF.

Flt Lt Gagan Oberoi is survived by his wife Nidhi Agrawal, parents, and a brother.