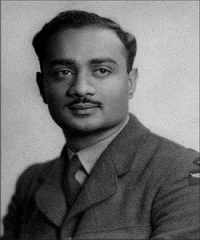 Flt Lt Aloysius William Barrette was born on 1st November 1920 in Jabalpur in present day Madhya Pradesh. Flt Lt William’s father, Shri John Barrette worked with the Gun Carriage Factory Estate , Jubbulpore (now Jabalpur) and Flt Lt William also grew up there. Flt Lt William was  affectionately called “Alloy” by his  brothers, Terence, John and Xavier and two sisters, Winifred and Rose. When the Second World War had started, Flt Lt William joined the IAF  and his batch formed one of the first batches of IAF trainees to be sent to Canada for further training as part of the Empire Air Training Scheme. Departing from the practice of batches trained at Indian Air Force establishments who were ‘Officer Cadets’, this particular group of trainees, from the 17th, 18th and 19th Pilots Courses, went to Canada in the rank of LAC. And at the time of receiving their wings, the candidates in this batch were given the rank of Sergeant Pilots in the Royal Air Force, and then sent to the European theatre for some time.

Flt Lt William was from the 18th Pilots Course and started his ground training from ITW Lahore, but soon moved to Beach Candy in Bombay. At the end of the course training at the ITW, he won the Flight Championship Trophy as he was the Flt Commander of the passing out candidates. In Canada, he got trained at the 13 Service Flying Training School (No.13 SFTS) at North Battleford, Saskatchewan Canada. Flt Lt William’s family was in close touch with him throughout his training days, writing letters and exchanging cards. The candidates were given a choice of going to Canada for further flying training on completion of their ITW phase and Flt Lt William was one of those who went as  a volunteer.

The training was conducted during 1943 to early 1945 and he was given wings on completion of training in the rank of Sergeant.  After returning to India, he was sent to the OTU at Peshawar and then given commission in the IAF. He returned to India on 2nd August 1945 and then got converted to the Hawker Tempest II fighter bomber.  He was promoted to the rank Fg Offr on 01 April 1947 and later became acting Flt Lt.  He spent some time with No.7 Squadron and later became part of No.8 Squadron, when he flew missions during 1947-48 War.

During 1948, Flt Lt William was serving with 8 Sqn AF based at Pune.  The unit with Squadron Leader Manohar Maharudrappa Sakhare as Commanding Officer was operating Hawker Tempest II fighter bomber. Flt Lt William was functioning as the Flight Commander and commanded a great amount of respect for being professionally competent pilot and a thorough gentleman. Flt Lt William flew over 80 sorties during the short period of two months during the J & K operations in 1948.  Though he was injured on several occasions due to ground fire, he cheerfully carried on with his missions. On one occasion in a mission over Mendhar valley, Flt Lt William was hit in the face by a shrapnel from an enemy anti-aircraft gun while going in for the attack.  Though bleeding profusely, he continued the attack with determination and destroyed the enemy post.

On 8th August 1948, Flt Lt William was tasked for another operational mission.  However while taking from the Jammu air field, his Tempest II aircraft crashed.  Flt Lt William could not survive the crash and thus an ace pilot and a committed soldier was lost. Flt Lt A W Barrette was awarded “Vir Chakra” for his courage, professional skill and high sense of duty during J & K operations of 1948. Flt Lt William’s “Vir Chakra” was the first and only posthumous gallantry award given for the 1947-48 Operations. The governor of Mysore Shri Jayachamaraja Wadiyar presented the award to Flt Lt William’s father Shri John during the republic day parade of 1958 at Bangalore nearly ten years after the operations.

The late Flight Lieutenant Aloysius William Barrett (3172) flew 80 Operational hours with in a short period of two months during the JAMMU and KASHMIR Operations. Although he was hurt on several occasions he carried on cheerfully and showed exceptional courage and high sense of duty. Whilst attacking enemy positions near Poonch, he was injured but immediately after recovery he resumed operational flying.

Again over the Mendar Valley, he was hit in the face by a shrapnel from the enemy Anti-Aircraft Fire while going into attack. Although he was bleeding profusely, he pressed home the attack with determination and destroyed the enemy post. His love for Operational flying was a source of inspiration to the other pilots of his Squadron. For the distinguished service rendered by him during the JAMMU and KASHMIR Operations, he has been awarded the Vir Chakra.