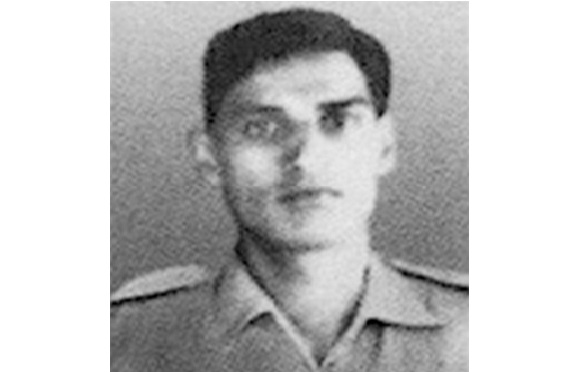 Flight Lieutenant Vijay Madhav Joshi hailed from Pune in Maharshtra and was born on 28th March 1940. Son of Shri Madhav Krishna Joshi and Smt Nalini Joshi, Flt Lt Vijay Madhav Joshi had two sisters Mohini and Vidya as his siblings. In his early childhood he went to Navin Marathi  Shala and later, went to Modern High School. Since his father was in the M.E.S(Military Engineering Service) which was a transferrable job, he was put in a boarding school (Modern High School). Thereafter he went to study at Rishi Valley school  and passed out with flying colours. He was very passionate about joining the Air Force and worked at realizing his dream.

Eventually, he got selected for the prestigious NDA and joined the 16th Course as part of the 'Dog Squadron'. After excelling in varous aspects of training, he passed out of the NDA on 01 June 1959.  He was commissioned into the Indian Air Force on 15 Dec 1960 at the age of 19 years. He was commissioned in the flying stream of the IAF and got trained as a fighter pilot as part of 78th Pilots' Course.  After completing his flying training he got posted to a fighter Squadron based at Air Force Station Adampur.  After serving for few years, he got married to Ms Sandhya on the 30th December 1964.  Subsequently he got posted to 220 Sqn based at Air Force Station Pune.

In 1965, Flt Lt VM Joshi was serving with 220 Squadron which was operating Vampire fighter bomber aircraft. The 220 Squadron was raised on the 23rd of December, 1957 and was known as the ‘Desert Tigers’. Initially located at Palam as 51 Auxiliary Air Force (AAF) Squadron, it later moved to 2 Wing, Air Force Station Pune on 9 Jan 63 with Squadron Leader Norman Foster Watts as its Commanding Officer. Very early in his service career Flt Lt VM Joshi got an opportunity to take part in active operations as the war broke out with Pakistan in 1965. As the war clouds gathered on the horizon, on 29 August 1965, 220 Sqn was tasked to move to Jamnagar and then to Pathankot as part of 45 Sqn. Flt Lt VM Joshi bidding good bye to his bride of few months took off along with his comrades for Jamnagar on the way to Pathankot.

Pakistan launched a full scale attack on 01 Sep 1965 in the Akhnoor area. Accompanied by heavy artillery fire at around 0330 hrs, 70 Pakistani tanks along with two infantry Brigades raced across the Akhnoor bridge with an intention to cut the Indian Army's  lifeline to the towns of Rajauri, Jhangar, Naushera and Poonch. 191 Inf Bde in charge of the area immediately asked for air support to thwart the enemy designs. In response to this, the Vampires of 45 Sqn were tasked to carry out offensive missions against the enemy targets with the first mission scheduled for 1719 hrs, second at 1730 hrs and third at 1740 hrs. Flt Lt VM Joshi was detailed to go for the second mission along with Sqn Ldr AK Bhagwagar, Flt Lt S Bhardwaj and Flt Lt WS Sondhi.

As the second mission with Flt Lt VM Joshi and three other pilots went in to attack the enemy armour, they were taken on by enemy Sabre jets of No 5 and No 15 PAF Sqns. The sidewinder missile armed PAF Sabres were technologically superior to Vampire aircraft but Flt Lt VM Joshi and his comrades continued to engage them, displaying courage and professional skill of a very high order. However eventually in the fierce air combat three Vampires were lost which included that of Sqn Ldr AK Bhagwagar, Flt Lt S Bhardwaj and Flt Lt VM Joshi. Flt Lt VM Joshi was a valiant and committed air warrior, who laid down his life at the age of 25 years in the service of the nation.