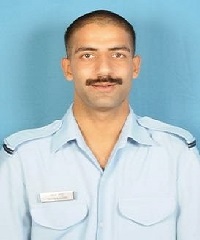 On the day of his last journey posters were pasted all over the narrow alleys of Kinari Bazaar at Chandni Chowk in the Walled City area, where his house stands. The posters depicted a sense of pride that area residents shared with the officer’s family. “He was our son and although all of us are saddened by the tragedy, we are proud that he laid down his life for the country.” ‘Adventurous and athletic’ was how a school friend Varun Jain described Flt Lt Tapan Kapoor.

M. Behra a friend his father Shri Naresh Kapoor for the past two decades, said Tapan had left his house on June 16 for Kolkata. “He called them regularly and shared his on-field experience. On the day of the crash, none of us had watched television and were oblivious of the developments. It was in the evening that Tony’s (Tapan’s pet name) uncle from Mumbai called his mother and inquired about him. We made several calls but could not reach him and then contacted his office,” Mr. Behra said, adding that it was around 7-30 p.m. that Tapan’s death was confirmed.