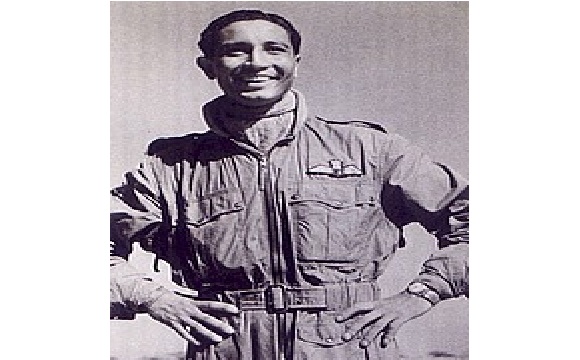 Flt Lt Thapen Kumar Chaudhary was quite passionate about joining the Air Force since his younger days and worked at realizing his dream. Eventually, he got selected for the prestigious NDA and joined the 11th NDA Course.  After excelling in various aspects of training, he passed out of the NDA on 01 Dec 1955.  He was commissioned as a Pilot Officer into the Indian Air Force on 23 Mar 1957 at the age of 21 years. He was commissioned in the flying stream of the IAF and got trained as a fighter pilot as part of 71st Pilots' Course.

After completing his flying training, he got posted to 23 Sqn a  new unit formed with Vampire FB52s. The Squadron under the command of Sqn Ldr CHL Digby was based at Poona.  Thereafter Flt Lt TK Chaudhary got posted to 27 Sqn, operating Hunter Mk 56 aircraft.  By 1965, Flt Lt TK Chaudhary had put in about 8 years of service and evolved into a professionally competent fighter pilot having expertise in various air operations.

During 1965, Flt Lt TK Chaudhary was serving with 27 Squadron known as "Flaming Arrows". The Squadron was formed at Adampur on 15 Feb 1957 with the de Havilland Vampires, with Squadron Leader George Douglas Clarke as its first Commanding Officer. The Vampires were replaced by September, the next year, with Hunter Mk 56 aircraft, when it was moved to Ambala. The squadron took part in "Operation Vijay" for the liberation of Goa in 1960 strafing various ground targets and airfields. As the war clouds gathered on the horizon in 1965, 27 Sqn with Wing Commander George Douglas Clarke as its Commanding Officer was tasked to prepare for launching various offensive air operations.

Pakistan launched a full-scale attack on 01 Sep 1965 in the Akhnoor area. Accompanied by heavy artillery fire at around 0330 hrs, 70 Pakistani tanks along with two infantry Brigades raced across the Akhnoor bridge with an intention to cut the Indian Army's lifeline to the towns of Rajauri, Jhangar, Naushera and Poonch. In response to this development, IAF Hunters of 27 Sqn were moved to Air Force Base Halwara and were called upon to undertake ground strikes against Pakistani air force and army assets such as air bases, guns and armoured positions. Flt Lt T K Chaudhary became part of various offensive air missions along with his Sqn pilots including Sqn Ldr DS Jog, Sqn Ldr ON Kacker, and Fg Offr PS Parihar. He was tasked for one more such mission on 15 Sep 1965.

However as Flt Lt T K Chaudhary was taking off on 15 Sep 1965 from the Halwara air base for the planned mission, his aircraft suffered a bird hit. The aircraft soon became uncontrollable and he was left with no choice but to eject. However the ejection was not successful and Flt Lt T K Chaudhary suffered grievous injuries.  He soon succumbed to his injuries and was martyred. Flt Lt Thapen Kumar Chaudhary was a valiant and committed air warrior who laid down his life in the line of his duty.