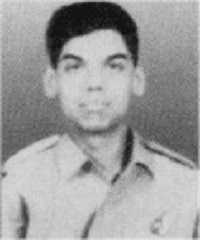 Flight Lieutenant Shrikant Chandrakant Mahajan was serving in the 5 Squadron IAF which was involved in operation Cactus Lilly . Operation castus Lilly was a Military operation undertaken between 3-16 December 1971 by the Indian Air Force (IAF) in the East Pakistan (current Banglades).

On the fateful day he was navigating  a Canberra (IF-899) plane piloted by Flt Lt Goswami which after having inflicted heavy casualties on Pakistani  Air Force on 4th and 5th of Dec1971 came under heavy AA firing by enemy and was finally shot down  over earstwhile East Pakistan(now Bangladesh). Though he was first  declared as missing in action but later was pronounced dead.

There were unconfirmed reports of him being taken as POW and lodged in Pakistan jail along with other Indian POWs.

Tribute by sister Mrs. Moti Dilip Naik ” I salute my brave brother for the supreme sacrifice and request our Indian Govt. to investigate in the matter, so that actual truth about this unsung hero is known to the entire nation.”