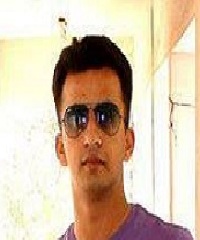 Flight Lieutenant Shikhar Kulshreshtha was Born in Noida, Uttar Pradesh. His family comprised of his father, Late Shri Desh Deepak Kulshrestha, mother Smt. Madhu Kulshrestha and one sister.
After completing his schooling Shikhar joined the Air Force through the National Defence Academy (NDA). He always wanted to join the Air Force as a fighter pilot and his dream came true when he was selected for training to become a combat pilot.
After his grueling training as a fighter pilot, he was posted to a combat fighter squadron at a forward airbase in Rajasthan. As part of the training, the pilots in fighter squadrons carry out combat maneuvers on a daily basis to maintain the preparedness required for any future combat mission. On 15 July 2013, Flt Lt Shikhar Kulshreshtha was tasked to practice a combat maneuver as part of his training, when his MiG-21 Bison aircraft experienced a flame out and crashed. Flt Lt Kulshreshtha using his pilot skills ejected but it was too close to the ground for safe landing. Flt Lt Shikhar Kulshreshtha could not survive after ejection and a precious soldier was lost in the service of the nation.
Flt Lt Shikhar Kulshreshtha is survived by his Mother  Smt. Madhu Kulshrestha and Sister.