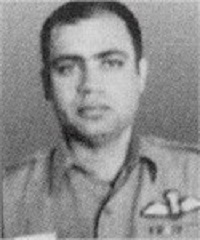 Flight Lieutenant SC Sandal following his childhood dream joined NDA and was commissioned into the Indian Air Force on 16 Oct 1965. He was selected to be a fighter pilot in the IAF and was very excited about his future assignments.

Flt Lt Sandal after his initial flying training was posted to various Air Force bases and gained experience in flying different types of aircraft. By 1971, Flt Lt Sandal had already completed 06 years of service in the Air Force and  evolved into a professionally competent pilot having expertise in various types of air operations. During 1971, he was serving with  35 Sqn, operating fighter bomber Canberra aircraft.

When the war with Pakistan broke out on 03 Dec 1971, IAF launched numerous strikes against enemy targets commencing 04 Dec 1971. The strikes were aimed at enemy’s air assets  and other vulnerable areas and points which could adversely affect its war waging capacity. The airfields were very important targets to deny the enemy from using its Air Force. On 05 Dec 1971, 35 Squadron was tasked with a mission to strike an enemy airfield at Masroor in Pakistan. The strike was planned during dusk period to have an element of surprise and reduce the chances of detection by the enemy.

Flt Lt Sandal was detailed for the mission along with his navigator Flt Lt K S Nanda. As it was a dusk strike mission with limited visibility conditions, it was a challenging task and demanded flying skills of very high order. Despite challenging conditions Flt Lt Sandal able guided by his navigator reached over the target and successfully carried out the attack. The attack destroyed one blast pen housing the parked aircraft on the Masroor airfield .

However the attack exposed the aircraft of Flt Lt Sandal to enemy air defence system and the aircraft came under heavy firing from ground based anti aircraft guns. The aircraft took direct hits and crashed in the enemy territory. Flt Lt Sandal could not survive the crash and was martyred.