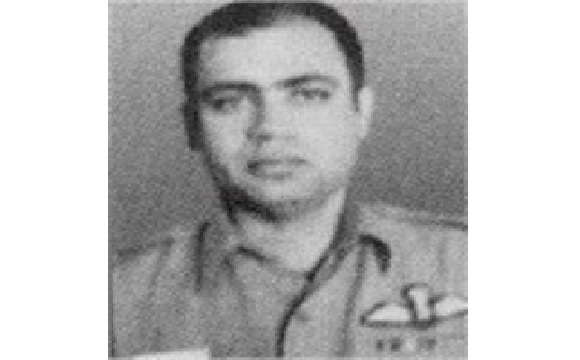 Flight Lieutenant Suresh Chandra Sandal was born on 19 Aug 1944. Following his childhood dream he joined NDA after his schooling. He joined the 24th NDA course and passed out on 01 June 1963. Later he was commissioned into the Indian Air Force on 01 Aug 1964 at the age of 22 years.

He was commissioned in the fighter stream of the IAF and got trained as a fighter pilot as part of 89/90th Pilots' course. After completing his flying training, Flt Lt SC Sandal served with various flying squadrons located at different Air Force bases. By 1971, Flt Lt SC Sandal had put in about 7 years of service and evolved into a professionally competent fighter pilot having experience in various air operations. During 1971, he was serving with  35 Sqn, operating fighter bomber Canberra aircraft.

During 1971, Flt Lt SC Sandal was serving with 35 Squadron known as "Rapiers" which was operating Canberra fighter bomber aircraft. The 35 Squadron was formed at Pune on 10 August 1958, under the command of Wing Commander Madhav Bhawrao Naik. As the PAF attacked 11 Air Force bases on 03 Dec 1971, the Indian Air Force decided to launch counter offensive operations on the eastern as well as western front. 35 Sqn commanded by Wing Commander Krishan Kumar Badhwar was tasked to undertake offensive missions against the targets on the western front. 35 Sqn launched numerous strikes against enemy targets commencing 04 Dec 1971. The strikes were aimed at enemy’s air assets  and other vulnerable areas and points which could adversely affect its war waging capacity. The airfields were very important targets to deny the enemy from using its Air Force. Flt Lt SC Sandal was tasked for one such strike mission on 05 Dec with Flt Lt K S Nanda as his navigator.

On 05 Dec 1971, 35 Squadron was tasked with a mission to strike an enemy airfield at Masroor in Pakistan. The strike was planned during dusk period to have an element of surprise and reduce the chances of detection by the enemy. Flt Lt Sandal was detailed for the mission along with his navigator Flt Lt K S Nanda. As it was a dusk strike mission with limited visibility conditions, it was a challenging task and demanded flying skills of very high order. Despite challenging conditions Flt Lt Sandal ably guided by his navigator reached over the target and successfully carried out the attack. The attack destroyed one blast pen housing the parked aircraft on the Masroor airfield.

As the target was important for the enemy, it was heavily defended by the anti-aircraft guns and air defence aircraft. Despite the threat of enemy air defence assets, Flt Lt Sandal and Flt Lt Nanda went for the attack. However their aircraft was believed to have been hit by ground based anti aircraft guns. The aircraft took direct hits and crashed in the enemy territory. Flt Lt Sandal and Flt Lt Nanda are presumed to have been taken over as a POWs (Prisoners of War). However, successive regimes in Pakistan have denied the existence of Indian POWs in its jails. Presently, Flt Lt SC Sandal's name features on the official list of the ’54 Personnel Missing in Action’, tabled in the Lok Sabha in 1979 by the then Minister of State of External Affairs Shri Samarendra Kundu.