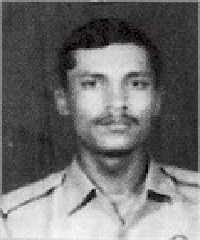 Flight Lieutenant Sandeep Jain was born on 20 Mar 1968. He was commissioned into the Indian Air Force on 11 June 1988 at the age of 20 years. He was commissioned in the flying stream of the IAF and got trained as a helicopter pilot as part of 141st Pilots' course. After completing his flying training, Flt Lt Sandeep Jain served with various flying squadrons located at different Air Force bases.

By 1994, Flt Lt Sandeep Jain had put in about 6 years of service and evolved into a professionally competent helicopter pilot. He joined 130 HU AF unit on 19 Dec 1994 and by that time he had accumulated substantial experience in various air operations by Aug 1996. During the month of Aug 1996, Flt Lt Sandeep Jain was on detachment in a forward area to carry out air maintenance operations in OP Meghdoot area. During this period enemy had redeployed the forces in Southern glacier area and had established new bunkers at commanding positions directly threatening Indian Army Posts. The accessibility to the Army posts had also become extremely difficult since helicopter routes to the posts were under the enemy’s constant watch and threat. However undeterred the IAF detachment was constantly engaged in the supply missions to the AGPL(Actual Ground Position Line) on Saltoro ridge in south west of Siachen glacier.

During 1996, Flt Lt Sandeep Jain was serving with 130 HU AF based at Jammu. 130 Helicopter Unit known as "THE CONDORS" was formed on 15 February 1988 at Jammu with Wing Commander Harbans Singh Bath as its first commanding officer. The Primary role of the Unit since its inception had been of Air Support towards Op Meghdoot. However, in addition, it had been called upon to undertake varying tasks viz. SHBO, Flood and Relief & causality evacuation. During Aug 1996, the detachment of 130 HU AF was tasked to carry out the air maintenance sorties for the Army posts deployed on south west of Siachen glacier. Flt Lt Sandeep Jain as captain of the aircraft was assigned to carry out such air drop missions on 26 Aug 1996. The other crew members included Pilot Officer Vaibhav Bhagwat as co-pilot, Sgt R Murigappa as flight gunner and Sgt Krishna C Jha as flight engineer.

The missions involved dropping diverse load for the posts passing through the area dominated by the enemy posts with anti aircraft batteries. Flt Lt Jain and his co-pilot Pilot Officer Vaibhav Bhagwat were completely aware of the risk involved, but they undertook the challenging task bravely and unflinchingly. Before the fateful sortie, two such missions were carried out successfully in spite of enemy’s interference. However during the third sortie after the load was dropped his helicopter was engaged by the enemy ground fire. The helicopter being flown by Flt Lt Sandeep Jain and Plt Offr Vaibhav Bhagwat took a direct hit and crashed in the icy mountains. Flt Lt Sandeep Jain, Plt Offr Vaibhav Bhagwat and other crew members Sgt R Murigappa and Sgt Krishna C Jha could not survive the crash and laid down their lives in the line of their duty.

During the month of August 1996 Flight Lieutenant Sandeep Jain was on detachment to carry out air maintenance in OP Meghdoot area. During this period enemy had redeployed the forces in Southern glacier area and had established new bunkers at commanding positions directly threatening Indian Army Posts. Accessibility to our posts had also become extremely difficult since helicopter route to the post was under the enemy’s constant watch and threat. It was a matter of great concern, since our post could not be air maintained under the circumstances. Withdrawing our forces was considered against the interest of National Security.