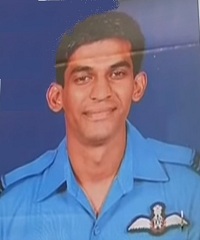 Flight Lieutenant S Achudev was born on 22 May 1991 in Kerala. Flt Lt Achudev was an ace fighter pilot of the IAF having considerable experience in flying various aircraft. During 2017, Flt Lt Achudev was posted to a Su-30 operating fighter squadron located at 11 Wing Tezpur which is  172 km from the China border. The Sukhoi Su-30 is a Russian-made, twin-engine fighter meant for all-weather, air-to-air and air-to-surface missions. The first of the Su-30 planes was inducted by the IAF in the late 1990s.

On May 23, 2017, at around 10.30 AM, Flight Lieutenant Achudev along with Sqn Ldr D Pankaj took off in their Su-30 aircraft from Air Force Station Tezpur. They were flying as part of the operational training task in a two-aircraft formation. The pilots are tasked to carry out various flying maneuvers and procedures as part of their operational training.  The plane went off the radar around 11:10 AM near Arunachal Pradesh’s Doulasang area, adjoining China.

A massive search was taken up to locate the aircraft and the missing pilots. The wreckage was found on May 26 through aerial recce, in a thick forest around 60 km from Tezpur. Search and rescue teams initially found a blood-stained shoe, a half-burnt PAN card and a wallet of one of the two pilots. The fighter jet’s black-box was recovered later on by teams comprising the Army, the Air Force, and civil administration personnel.

Flt Lt Achudev could not eject at the time of the crash, according to the analysis of the jet’s Flight Data Recorder and some other articles recovered from the crash site. He could not survive the crash and the precious life of a professionally competent fighter pilot was lost in the horrific accident. Flt Lt Achudev was a proud air warrior and a dedicated soldier who laid down his life in the service of the nation.

We were made to sit together in class for a whole year by the class teacher.. he was a restless guy in class.. short tempered too.. you’d never know what made Achu angry.. and obviously we fought a lot.. but then we were kids, so it was only natural that we fought.. I’ve visited his home near pongumoodu a couple of times.. I still remember playing Contra on his TV video game machine.. cycling around the pond in front of his home.. a slim weak guy he was.. .

When Achu left Loyola school for RIMC in the 8th standard I never thought he would grow into a confident, gentle and yet so light-hearted a person.. his arms felt so strong when I shook hands with him during our school get together.. without any exaggeration let me confess that his mere presence inspired me to be more like him.. after achu had left that day 2 or 3 of us kept talking about how much Achu had changed from his school days at Loyola.. he was so smart that a few days later I remember mentioning about him to even one of my students in some conversation..

And now Achu is no more.. Achu lost his life doing something he had always dreamt of.. in the past I have never really thought about the pilots when I’ve heard news regarding a crashed Fighter Jet.. It was different this time around.. I had no idea until today morning that it was Achu who piloted the Sukhoi-30.. Shot down by China, lost control, error or whatever it was.. Achu has left us.. Many of us may not even hear about Achu after a week, because that’s the life of an Indian soldier.. but before everyone forgets him, I want at least the people I know to know how amazing a person Achu was.. Achu Dev S.. one of the gentlest and nicest persons I’ve known.. proud to say I was once your bench-mate.. that smiling face of yours from when we met in December.. I can’t get that out of my head Achu..

We still cannot accept the reality that you guys are gone, that we won’t hear your voice again, that we won’t see your smile. No farewell words spoken no time to say goodbye, you were gone before we knew it & only GOD knows why. Dear Achudev and Divesh Pankaj you shall be there in our hearts and minds, mentoring us whenever we will be weak and guiding our way through the darkness. May the almighty grant peace to your soul & strength to your families.

One last thing, You should not have left us like this Proud of you two….  Jai Hind!
:Prakhar