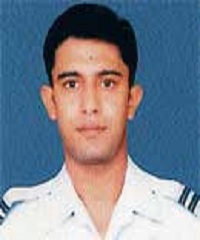 Flight Lieutenant Ronald Kevin Serrao  was born on January 17, 1981 and was brought up in Mangalore, Karanataka. Son of an Army veteran Lieutenant Colonel John Serrao and Dr Jessica Serrao, he had an elder brother, Kenneth Serrao. He did his schooling from Hyderabad and Sikkim and later completed his PUC from Chennai. As he was endowed with good looks , he dabbled in modeling too during his student days.
He joined the National Defence Academy at Kadakvasla in Pune in 1998 and got commissioned into the Indian Air Force in 2002 at the age of 21 years. He excelled during his training at NDA Khadakvasla and won the coveted Best Cadet award. He got selected in the fighter stream of the IAF and underwent various stages of flying training before getting posted to the operational squadron. He served with fighter squadrons operating MiG-23 and MiG -29 aircraft. Later on, Flt Lt Ronald moved to flying Jaguar aircraft and got posted to the Air Force base at Ambala. After serving for few years, he got married to his colleague Flt Lt Deepika Dadlani on 29th April 2006.
Air Operation : 18 Jan 2007
During 2007, Flt Lt Ronald was serving with a fighter squadron based at Air Force Station  Ambala. As part of live firing training the squadron moved to Rajasthan in Jan 2007. On 18 Jan 2007, Flt Lt Ronald was participating in an air to ground firing exercise as part of his operational training task. His Jaguar fighter aircraft got airborne at 1640 hours  from the Air Force base near Bikaner to fly towards Pokharan range. The Pokharan range in Rajasthan was used by the Air Force pilots as a training ground for various air operations using live ammunition. As this was a  live air to ground exercise the aircraft was  loaded with live armaments.

During the flight towards the target his Jaguar fighter aircraft blew up mid-air and crashed between Delasar and Dhaysar villages, about 55 kms from Jaisalmer. As the aircraft caught fire suddenly due to the development of unforeseen technical snag, Flt Lt Ronald did not get enough time to eject and a precious life was lost in the service of the nation. Flt Lt Ronald was a valiant soldier and committed air warrior, who laid down his life at the age of 26 years in the line of his duty.