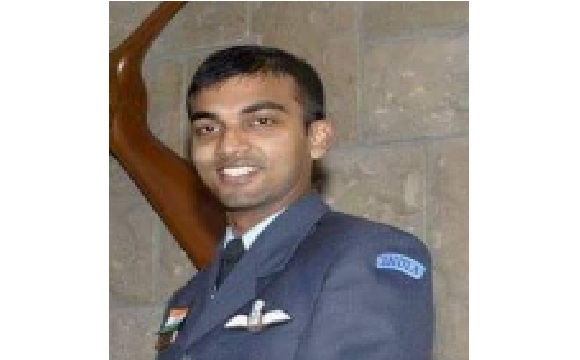 Flight Lieutenant Manu Akhouri was born in Daltonganj now (Medininagar) district in Jharkhand on 21 Feb 1984. Son of Col Sanjay Akhouri (Retired) and Smt Neera, he had a brother Chaitanya and sister Pragya as his siblings. However, being the youngest of 3 siblings, he was adored the most.  Right from his younger days, he chased the dream of becoming an Air Force pilot and would often stare at the sky, hoping to conquer it one day. As a child, his only toys were planes & helicopters and he would rush out to see aircraft flying past. Following his passion, he got selected for the National Defence Academy and joined the prestigious institute. At that time he was a first-year engineering student, but he left before the final exams to join the National Defence Academy (NDA). Later he went to the Air Force Academy in Dindigul near Hyderabad and got commissioned as a Flying Officer on 17 June 2006 at the age of 22 years.

He got trained as a fighter pilot and passed out as part of 177 Pilots' Course. Very soon, he gained experience in various air combat operations and developed into a professionally competent air warrior.  He underwent training on Advanced Jet Trainer Hawks in Britain and got posted to 17 Sqn called the "Golden Arrows" operating MiG-21s.

During Sep 2009, Flt Lt Manu Akhouri was serving 17 Sqn based at Air force Station Bhatinda. 17 Squadron was raised on 01 Oct 1951 at Ambala with Flight Lieutenant Doughlas Llewellyn Springett as its first commanding officer. Initially the squadron was equipped with Harvard IIB aircraft and later with Hunter in 1957. The squadron moved to various air bases thereafter and eventually moved to Bhatinda in the year 1983.  It was re-equipped with MiG-21 in the year 1975 when the squadron was operating from Adampur airbase. In 2009, 17 Sqn was based at Air force Station Bhatinda and functioning with Wing Commander Tarun Chaudhry as its commanding officer. During peacetime training is one of the most important activities of IAF which helps it to remain prepared to take on any eventuality. A war-like situation is created in the air for the pilots to practice and remain operationally ready. Flt Lt Manu Akhouri too was undertaking training sorties to practice complex air operations on a regular basis. On 10 Sep 2009, Flt Lt Manu Akhouri was undertaking another such sortie.

As planned Flt Lt Manu Akhouri in his MiG-21 aircraft took off from the Air Force Base at Bhatinda airbase, after completing the necessary operational checks on ground. However in its return leg of the mission, the aircraft developed a serious technical snag. As his aircraft caught fire, Flt Lt Manu saw the village's higher secondary school below him. Without caring for his own safety, he maneuvered his burning aircraft away from the school to an empty field before crashing. The aircraft crashed  about 20 km from Bhatinda airbase in Muktsar district of Punjab, and Flt Lt Manu Akhouri could not survive the crash. Flt Lt Manu Akhouri was a dedicated soldier and a professionally competent air warrior, who laid down his life in the line of his duty at the age of 24 years.