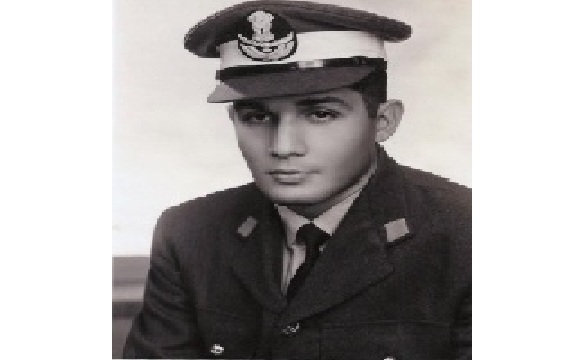 Flight Lieutenant Lloyd Moses Sasoon hailed from Mumbai in Maharashtra and was born on 15th July 1942. Son of Smt Mozelle and Shri Moses Sasoon Kandlekar, Flt Lt Moses grew up to be a bright and well groomed child. At that time his father worked as Chief Engineer-Bombay Region in the Bombay Port Trust Authority. Flt Lt Moses studied initially from St. Mary’s High School in Mazagon, Bombay and then went on to complete his Inter-Science Level at K.C. College Churchgate in Bombay.

He always nursed the idea of joining the Armed Forces since his younger days and continued to follow his dream. Eventually he got selected to join the National Defence Academy (NDA) at Khadakwasla in 1962. He joined the 22nd NDA course and passed out on 01 June 1962. He was commissioned into the Indian Air Force on 22 June 1963 at the age of 21 years. He joined the flying stream of the IAF and got trained as a fighter pilot as part of 84th Pilots' course. He was very happy to be a fighter pilot in the IAF and soon gained expertise in various air operations.

After serving for some time, on 27 Nov 1966, then Flying officer Moses married Ms Sybia, daughter of Smt Elizabeth and Shri Robert Jacob Kasukar. The couple had two sons, Dov born on 17 Nov 1968 and David born on 19 Dec 1970. He initially served with 5 Sqn flying Canberra Bombers. This squadron was one of the coveted units of the Indian Air Force and had on its roll the most committed and competent pilots. Between the years 1967 to 1969 Flt Lt Moses served in units located in Madras (Now Chennai) and Agra. Later he got posted to serve with JBCU (Jet Bomber Conversion Unit) based at Agra.

During 1971, Flt Lt Lloyd Moses Sasoon was serving with JBCU (Jet Bomber Conversion Unit) based at Agra. JBCU was raised at Agra on 01 May 1958 with Squadron Leader Mukund Ramchandra Agtey as its first commanding officer. When the war with Pakistan broke out on 03 Dec 1971, IAF launched numerous air operations against enemy targets commencing 04 Dec 1971. Besides undertaking deep penetrations strikes inside enemy territory , IAF also launched various close air support operations in support of our ground forces. The air support operations invariably were attacks against enemy tanks, artillery positions and other ground based weapons and systems in support of our ground forces. On the other hand deep penetration strikes were targeted at enemy vulnerable areas and positions to adversely affect it war waging capacity. JBCU too took on its operational role and launched many offensive air operations. On 04 Dec 1971, Flt Lt Moses along with his navigator Flt Lt RM Advani was tasked for an offensive mission on the western border. The operation was a 4 aircraft mission to attack Mianwali airfield.

On 04 Dec 1971, Flt Lt Moses along with his navigator Flt Lt RM Advani took off in their Canberra ( IF-916) from Agra as planned. It was Mission 135 and had as its target the heavily defended Pakistani airfield of Mianwali with a TOT (time over target) of 2000 hrs. As the target was important for the enemy, it was heavily defended by the anti-aircraft guns and air defence aircraft. Despite the threat of enemy air defence assets, Flt Lt Moses and Flt Lt  Advani went for the attack. However their aircraft was believed to have been engaged by an enemy Mirage III aircraft and shot down. Flt Lt Moses and Flt Lt  Advani are presumed to have been taken over as POWs (Prisoners of War). However, successive regimes in Pakistan have denied the existence of Indian POWs in its jails. Presently, Flt Lt Lloyd Moses Sasoon's name features on the official list of the ’54 Personnel Missing in Action’, tabled in the Lok Sabha in 1979 by the then Minister of State of External Affairs Shri Samarendra Kundu. In the year 1974 the wife of Flt Lt Lloyd Moses Sasoon and her sons immigrated to Israel.