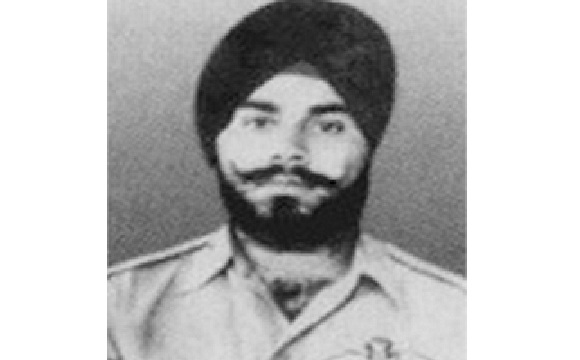 Flight Lieutenant Gurbax Singh Ahuja was born in the year 1939 in the undivided Punjab. His parents migrated from Hoti Mardan (Pakistan) in 1947 and settled in Joria Bhathian locality of Patiala in Punjab. He joined the prestigious National Defence Academy (NDA) after completing Faculty in Arts (FA)/intermediate from Government Mohindra College, Patiala. He 14th Course of NDA and after excelling in various aspects of training passed out on 01 June 1958.

He was commissioned into the Indian Air Force as a Pilot Officer on 19 Dec 1959 at the age of 20 years. He joined the flying stream of the IAF and got trained as a fighter pilot as part of the 76th Pilots' Course.  After completing his flying training, he served with various flying squadrons located at different Air Force bases. After serving for few years he got married to Ms Rajinder Kaur from Ludhiana in January 1963 and the couple had a son Aveninder Singh. By 1965 Flt Lt G S Ahuja had evolved into a competent and ace pilot having expertise in various types of air operations.

During 1965, Flt Lt GS Ahuja was serving with 27 Squadron known as "Flaming Arrows". The Squadron was formed at Adampur on 15 Feb 1957 with the de Havilland Vampires, with Squadron Leader George Douglas Clarke as its first Commanding Officer. The Vampires were replaced by September, the next year, with Hunter Mk 56 aircraft, when it was moved to Ambala. The squadron took part in "Operation Vijay" for the liberation of Goa in 1960 strafing various ground targets and airfields. As the war clouds gathered on the horizon, 27 Sqn with Wing Commander George Douglas Clarke as its Commanding Officer was tasked to prepare for launching varous offensive air operations.

Pakistan launched a full-scale attack on 01 Sep 1965 in the Akhnoor area. Accompanied by heavy artillery fire at around 0330 hrs, 70 Pakistani tanks along with two infantry Brigades raced across the Akhnoor bridge with an intention to cut the Indian Army's lifeline to the towns of Rajauri, Jhangar, Naushera and Poonch. On 09 Sep Pakistani forces were building up for an armoured thrust in Khem Karan area and Indian army was under great pressure. In response to this development, IAF Hunters were called upon to undertake ground strikes against Pakistani gun and armoured positions. Flt Lt GS Ahuja was tasked for one such ground attack mission on 09 Sep 1965.

It was a four aircraft mission tasked to attack enemy tanks, guns and armoured vehicles in Khem Karan area. The mission was led by Sqn Ldr Bhupendra Kumar Bishnoi with Flt Lt GS Ahuja as his No 2. The other two pilots included Flt Lt SK Sharma and Fg Off Parulkar. The enemy positions were heavily defended by anti aircraft batteries and posed serous threat, but undeterred, Flt Lt GS Ahuja and his comrades flew dangerously close to achieve maximum accuracy.  The four Hunters were greeted with 40mm anti-aircraft fire at Kasur. But Sqn Ldr Bishnoi and Flt Lt Ahuja  displaying courage and superior flying skills destroyed around seven enemy tanks. Fg Offr Parulkar and Flt Lt Sharma were the last to turn back from enemy air space. Fg Offr Parulkar's plane was hit but he managed to land safely.

However as Flt Lt Ahuja and Flt Lt Sharma were trying to land at Halwara after the mission, their aircraft collided mid-air. As a result  Flt Lt Ahuja's Hunter ( BA-236) lost a wing and crashed to the ground. Flt Lt SK Sharma managed to land his aircraft safely even though it was damaged. However Flt Lt GS Ahuja could not survive the crash and was martyred. Flt Lt GS Ahuja  was a valiant and committed air warrior who laid down his life at the age of 22 years in the line of his duty.