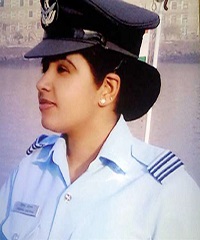 Flight Lieutenant  Deepika  Sheoran belonged to Loharu in Bhiwani district of Haryana. Born to Sri Dalip Singh Sheoran and Smt Prem Lata, Flt Lt Deepika was the eldest among three siblings. Her father was an executive engineer with Haryana public health department. Flight Lt Deepika after completing her B Tech in computer engineering from Faridabad had got a placement in a private firm at Noida. She was also selected for the Army as a lieutenant and had completed all the formalities for joining the same.

But Flt Lt Deepika followed her passion of working in  Indian Air Force and soon qualified for the technical branch of the IAF . She was finally commissioned in Jan 2013 as flying officer, after completing her training at Air Force Technical College at Bangalore. Since her childhood Flt Lt Deepika was passionate about flying aircraft, so she was happy to join the Air Force, even though she was joining as an engineer and not as a pilot.

Soon after her training Flt Lt Deepika was posted to the Air Force station at Port Blair. She was very happy to get the posting as her husband Kuldeep Dalal was also serving as assistant Commandant with Cost Guard at Port Blair.

However, the aircraft lost contact with the ground radar when it was 151 nautical miles east of Chennai. The aircraft had taken a left turn with rapid loss of height from 23,000 feet. The disappearance of the Russian-made AN-32 twin engine turboprop transport aircraft kicked off India’s biggest search operation yet for a missing plane on the sea.

Consequently in September, all the 29 people on board the AN-32 plane were declared “presumed dead”. Flt Lt Deepika was a dedicated soldier with deep desire to serve the nation, however her life was cut short and and a committed soldier was lost in the line of duty. Flt Lt Deepika thus unfortunately disappeared in the same sky where she always wished to fly.