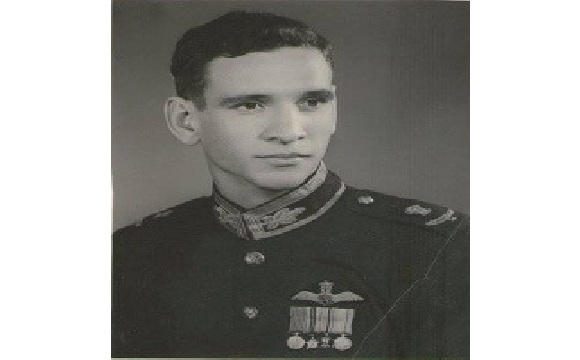 Flight Lieutenant Brian Rupert Eric Wilson hailed from Pune in Maharashtra and was born on 29 Jan 1944. He got selected to join the prestigious NDA after his schooling. He was commissioned into the Indian Air Force on 28 Oct 1963 at the age of 20 years.

He was commissioned in the fighter stream of the IAF and got trained as a fighter pilot. After completing his flying training, Flt Lt BRE Wilson served with various flying squadrons located at different Air Force bases. Flt Lt Wilson got married in 1970, and had a baby girl just before the war broke out. By 1971, Flt Lt BRE Wilson had put in about 8 years of service and evolved into a professionally competent fighter pilot having expertise in various air operations.

In December, 1971, Flt Lt BRE Wilson was serving with 16 Squadron known as "Black Cobras", which was operating Canberra bomber aircraft.  The 16 Squadron of the IAF was formed at Pune in 1950, with six Spitfires and one Hawker Tempest aircraft. The Squadron served as a bomber squadron of the Western Air Command. The squadron was re-equipped in 1954 with Squadron Leader George Victor Francis as its commanding officer, with B-24 Liberators and its role too was changed to heavy bombing. In 1957, the squadron received Canberra bomber aircrafts and and the role was redefined as Bombing and interdiction. In 1962 the squadron moved to Kalaikunda with Wing Commander Surinder Singh as its commanding officer.  As the PAF attacked 11 Air Force bases on 03 Dec 1971, the Indian Air Force decided to launch counter offensive operations on the eastern as well as western front. 16 Sqn under Wing Commander Padmanabha Gautam was tasked to undertake offensive missions against the targets on the eastern front. The first wave of attacks were launched on 04 Dec 1971. Flt Lt BRE Wilson along with Flt Lt RB Mehta as Navigator were tasked one such combat mission on 15 Dec.

As part of the ongoing operations, 16 Sqn was tasked for a number of interdiction missions. On 15 Dec 1971, Flt Lt BRE Wilson along with Flt Lt RB Mehta as Navigator were assigned the task of attacking a target near Dacca, which was militarily significant target for India. As planned Flt Lt Wilson and Flt Lt Mehta took off in the morning of 15 Dec and reached the target area as per the given TOT (Time Over Target). As the target was important for the enemy, it was heavily defended by the anti-aircraft guns. Despite the threat of enemy air defence assets, Flt Lt Wilson and Flt Lt Mehta went for the attack. However their aircraft received direct hits from the anti-aircraft guns and got severely damaged. Eventually the aircraft crashed over Kurmitola Cantonment in East Pakistan and Flt Lt Wilson and Flt Lt Mehta went down with the aircraft and were martyred.

Flt Lt BRE Wilson was a valiant soldier and committed air warrior, who laid down his life at the age of 27 years in the line of his duty following the highest traditions of the IAF. Flt Lt BRE Wilson is survived by his wife Smt JB Wilson.