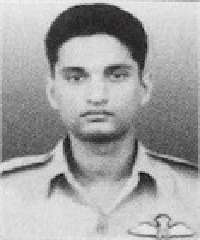 Flight Lieutenant Andre Rudolph D’Costa hailed from Hyderabad and was born on 15 November 1942. Son of Shri Albert D’Costa, he was commissioned into the IAF on December 21, 1963 at the age of 21 years. He was commissioned in the fighter stream of the IAF and got trained as a fighter pilot. After completing his flying training, Flt Lt D’Costa served with various flying squadrons located at different Air Force bases. By 1971, Flt Lt Da Costa  had put in about 8 years of service and evolved into an ace fighter pilot having expertise in various air operations.

After serving for few years, he got married to Ms Sandra and the couple had two kids. During 1971, Flt Lt D’Costa was serving with the 7 Squadron based at Air Force Station Bagdogra and was operating Hunter aircraft. The Hawker Hunter aircraft was inducted into the IAF in 1958 and 7 Sqn became the first IAF Sqn to be equipped with that aircraft.

During 1971, Flt Lt D’Costa was serving with 7 Sqn, known as “Battle Axes” and was based at Air Force Station Bagdogra. As the PAF attacked 11 Air Force bases on 03 Dec 1971, the Indian Air Force decided to launch counter offensive operations on the eastern as well as western front. 7 Sqn was tasked to undertake offensive missions against the targets on the eastern front. The first wave of attacks were launched on 04 Dec 1971. Flt Lt D’Costa was tasked for a strike mission as Number 2 along with Sqn Ldr SK Gupta on 04 Dec. As planned Flt Lt Da Costa took off in his Hunter aircraft (BA-295) along with Sqn Ldr SK Gupta and reached over their targets in Lal Munir Hat in the Rangpur Sector.

After successfully strafing Army targets, Flt Lt D’Costa attacked a goods train south of Lal Munir Hat Bridge. The area was heavily defended by anti aircraft guns, but  showing great courage, Flt Lt D’Costa still pressed on with the attack causing extensive damage. However while carrying out attack on the train, Flt Lt D’Costa’s aircraft was hit by anti aircraft guns. Although he tried his best to bring his aircraft back, he could not succeed as the aircraft had taken extensive hits and eventually crashed in a marshy area. Flt Lt D’Costa  was a valiant soldier and committed air warrior, who laid down his life in the line of his duty following the highest traditions of the IAF. Flt Lt D’Costa was given the gallantry award, “Vir Chakra” on 26 Jan 1972 for his outstanding bravery, devotion to duty and supreme sacrifice.

On 4 December 1971, Flight Lieutenant Andre Rudolph D’Costa flew an offensive sortie in Lal Munirhat in the Rangpur Sector. After successfully strafing Army targets, he attacked a goods train south of Lal Munirhat Bridge when he was hit. Although he tried to bring his aircraft back, it crashed and he was killed. In this action, Flight Lieutenant Andre Rudolph Da Costa displayed gallantry of a high order.