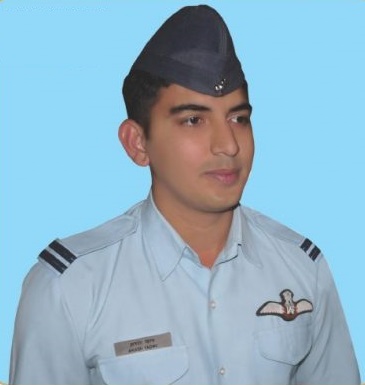 Flight Lieutenant Akash Yadav was born on January 2, 1986 in Kosli in Rewari district of Haryana. He was the son of an army veteran Sub Satbir Singh Yadav and Smt Sunita Yadav. After completing his school from Army School Bhatinda in Punjab, he joined National Defence academy (NDA) khadagwasala, Pune for the 109th course, in the year of 2003.

After passing out from NDA he opted for Air Force and joined Air force Academy (AFA) Dindigul, Hyderabad for his flying training. He passed out from AFA on 15th December 2006 and later joined 118 helicopter unit at 19 Wing, AF. In a short span of  time he achieved ‘C’ Green and N.V.G  certification on Mi-17 helicopter. Flt Lt Akash was passionate about his job and took all his in-service training courses very seriously to become an ace pilot. He soon transformed into an experienced pilot with more than 1000 flying hours to his credit.

On 19th November 2010 ,the fateful day, Flight Lieutenant Akash Yadav was flying  an “air-maintenance” sortie on  Mi-17 around Tawang area which is  located about 9,000 feet above the ground at Chinese border . “Air-maintenance” refers to helicopter-aided support of forward army posts on the China frontier, at altitudes of 8,000ft to 14,000ft where winds are high and oxygen density is almost 30 percent lower, and where supplies are either para-dropped or the helicopters make touch-and-go landings.

The ill-fated Mi-17 helicopter crashed near the China frontier on a wooden hillock at Tepsha village near Bomdir area, about 6km from Tawang, from where it had taken off, at about 12:04pm, leaving no survivors. The counter-Maoist operation chopper, was seen to blast mid-air as per some eye witnesses. This was the second time a plane had crashed mid-air on China frontier in the same year. The 12 soldiers who lost their lives in this horrific accident included the pilot, Flight Lieutenant Akash Yadav, the co-pilot Flight Lieutenant Nishant Rai, 10 other Air force personnel and an army officer.

A Tribute by his sister:

This is dedicated to my beloved Bhaiya, who loved like there was no tomorrow…

Sometimes, it’s strange how you seem to feel nothing. No fear; no anger; no sorrow; no happiness; no remorse. Nothing. And that’s what had exactly happened to her. She had simply failed to feel.

They had been married for two years now. He had proposed to her 27,000ft high above the ground level. “Marry me, Neha.” Those were his simple words. What was special was that they were mid air. He stood at the edge of his copter and confessed his feelings for her. “Will you jump off if I say no Akash Yadav?” she had laughed, before hugging him tight, and accepting his proposal.

That evening, as she lied on the couch in their apartment in Guwahati, where she and Akash had spent 2 blissful years of their married life, the winds were oddly strong. There was an empty void inside her. She felt incomplete. More like she had lost a body part maybe. The tiny finger. Or a whole leg. The pain was the same. She lay there unmoved. Tears flowed. She fell uncomfortably asleep for sometime, deep in thoughts, mostly bad.

At 25, they were totally committed to each other. Being in the same profession, it wasn’t very difficult for Akash and Neha to be by each other’s side all the time. What she loved the most about him, was the way he expressed his love for her. It was never cliché. He had to do something out of the box for her all the time and make her feel like a princess. Everything they both shared was special. In spite of loving each other, their first love was still their profession. Their dedication to each other and their work was what they were known for amongst family and friends. He’d joke many times, “If I had to choose between Neha and my first love, I’d choose my first love.” Only Neha knew it was not a joke. For, she loved her first love more too.

Just last month she had had an argument with Akash. It was really silly. She wanted to get her hair straightened, and Akash didn’t want her to.

“Please Akash! I just want to try it once!”

“But I love your curls, honey. Poker straight hair will make you look like your mom! And you know…!”

“Enough Akash! Everything is not funny… You never agree to what I say… It’s my birthday this month… You just don’t love me!“

Akash had walked out of the house to her last statement. Their fights had always been this silly. They really fought like 10year olds, over stupid stuff. And they loved each other like 10year olds too, innocently, still blushing when someone mentioned them. He only returned in an hour and handed an envelope to her. It was a spa voucher and a hair treatment card. It said ‘Happy birthday sweetheart’ and was signed ‘I will always love you, Akash.’

Neha was woken up with a jerk. A hypnic jerk in psychological terms. Those 30 odd seconds after she opened her eyes were wonderful. For she was delusional. She felt all that pain was a dream. A rather bad one. And then she’s hit by the moment of realization. She pulled out the envelope from under her head… And traced her fingers on ‘I will always love you, Akash’ trying to touch what he had touched once. And she then looked at the 8day-old newspaper still lying on the table. Dated 20th November 2010. 3 days after her 27th birthday. Bottom left corner of the Times of India read –

’11 Air Force personnel and an army lieutenant colonel were killed when an Air Force Mi-17 helicopter crashed near the China frontier on a wooden hillock at Tepsha village near Bomdir area, about 6km from Tawang, from where it had taken off, yesterday afternoon at about 12:04pm, leaving no survivors. The counter-Maoist operation chopper, said the eyewitnesses was seen to blast mid-air. This is the second time a plane has crashed mid-air on China frontier in the same year. The 12 dead include the pilot, Flight Lieutenant Akash Yadav, the co-pilot Flight Lieutenant Nishant Rai…” She stopped reading.

She wiped her tears. And checked her phone. It showed 12:07 am. She went through the last message sent by Akash to her- “Will join u 4 dinner. On a rescue mission. Love u. Tc.”

Sometimes, it does not matter how hard you try. Some loses can never be recuperated. Some memories can never fade. And then there are times, when you just don’t want to try. This was that time. Neha wanted to sleep. She knew she should get up, change her clothes, and switch off the lights. She knew she should put that beautifying cream on her face, and pop those tablets which make her look spotless. She knew it. But she didn’t want to. She didn’t care. All she cared for was him. And he wasn’t there. Neha had failed to try. Failed to accept the truth. She simply didn’t want to. She just lied there, motionless.

Someone knocked at her door. It was an orderly. He had a message for her. In 3 minutes after he left, Neha was ready, and she stepped out of their apartment in the Air Force station, Guwahati, and stepped into her office. Her first love had called her.

A Tribute by his father Satbir Singh Yadav in 2018:

Exactly eight years ago on this day, we lost Flt Lt Akash Yadav forever but he continues to live in our memories and remains an integral part of four lives. It is said that “Moksha” is not impossible but is certainly difficult to attain and one can achieve it only if all desires are fulfilled in one’s lifetime. As Akash’s desire to serve the nation and the society remained unfulfilled owing to his martyrdom, I believe that he must have taken rebirth somewhere instead of attaining “Moksha”.

Though I am sure he has taken rebirth somewhere to savour the fruits of his good deeds, he continues to live with us too in every nook and corner of our house and our hearts. Wg Cdr Praveen Chandra Pant’s poem dedicated to his friend, Flt Lt Akash Yadav conveys our feeling that he is still around us….

I am not there.
I do not sleep.
I am a thousand winds that blow.
I am the diamond glints on snow.
I am the sunlight on ripened grain.
I am the gentle autumn rain.
When you awaken in the morning’s hush,
I am the swift uplifting rush.
Of quiet birds in circled flight.
I am the soft stars that shine at night.
Do not stand at my grave and cry;
I am not there. I did not die.

‘Akash’ is also the inspiration behind “Shaheed Pilot Akash Yadav Yuva Prerana Samiti” engaged in education of slum children in our village ‘Kosli’ in Haryana. We are married to the cause of developing these not so fortunate children into gems of our society and eventually see our “Akash” in everyone of them.

Akash, my son, while alive, you were the inexhaustible source of our happiness and now have turned into a perennial source of inspiration for us to serve the children of the nation you loved and died for.