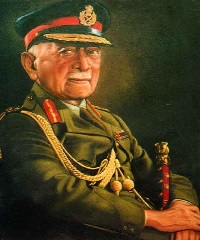 Field Marshal Cariappa was known as “Chimma” to his relatives. After completing his education in the Central High School at Madikeri in 1917, he attended Presidency College, Chennai to pursue his education further. He was interested in reading and playing sports. During his college, he learned that Indians were being recruited into the Army, and they were trained in India. As he wished to serve as a soldier, he applied for the training. Out of the 70 applicants, Cariappa was one of 42nd applicant who was selected for the first batch of KCIOs (King’s Commissioned Indian Officers) at Daly Cadet College, Indore. He scored well in all the aspects of his training and graduated seventh in his class. He was then commissioned in the Carnatic Infantry and was in active service with the 37 (Prince of Wales) Dogra in Mesopotamia (present day known as Iraq) and then he was posted to the 2nd Rajput Light Infantry.

Field Marshal Cariappa got married in Mar 1937, in Secunderabad, to Muthu Machia, a forest Officer’s daughter. Cariappa and Muthu had a son and a daughter. Their son, K C Cariappa also called “Nanda”, who was born on 4th Jan 1938, and daughter Nalini on 23 Feb 1948. Their son Nanda, joined the Indian Air Force and rose to the rank of Air Marshal. Though Field Marshal Cariappa and Muthu’s married life was happy initially, but later due to ideological differences, and Field Marshal Cariappa’s professional commitments, their marriage broke down. In Sep 1945, the couple separated without any formal divorce. Unfortunately three years later Muthu died in an accident.

In 1925, Field Marshal Cariappa visited various countries including Europe, United States, Japan, and China. He met a large number of soldiers and civilians in various nations and the tour proved to be educational for him. He was given a nickname “Kipper” by a British officer’s wife, which was found to be difficult to pronounce by Field Marshal Cariappa, while he was serving in Fatehgarh. In 1927, Field Marshal Cariappa was promoted to captain, but the appointment was not officially gazetted until 1931.

In 1947, Field Marshal Cariappa became the first Indian to be selected to undergo a training course at Imperial Defence College, Camberly, UK. After India’s independence, Field Marshal Cariappa was appointed as the Deputy Chief of General Staff with the rank of Major General. Thereafter, he became the Eastern Army Commander and General Officer Commanding-in-Chief, Western Command during the outbreak of war in Pakistan.

Field Marshal Cariappa was appointed as the first Commander-in-Chief of an independent Indian Army on 15th Jan 1949. He was awarded the ‘Order of the Chief Commander of the Legion of Merit’ by American President, Harry S Truman. The Government of India conferred the rank of Field Marshal on Cariappa in 1986.

After four years of service as the C-in-C, Field Marshal Cariappa retired on 14 Jan 1953. Before he retired, he made a farewell visit to his parent regiment, the Rajput Regiment, at the Rajput Regimental Centre accompanied by his son and daughter. After his retirement, he served as the Indian high commissioner to Australia and New Zealand until 1956.

Field Marshal Cariappa’s health began to deteriorate in 1991, he suffered from arthritis and heart problems. He died in his sleep on 15th May 1993, at the Bangalore Command Hospital where he had been receiving treatment for a few years. His mortal remains were cremated in Madikeri two days later.